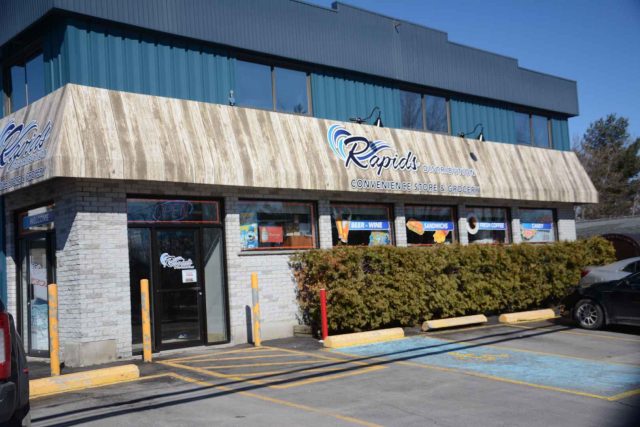 Rapids Convenience and Carwash now occupies the old Robertson’s Convenience, and is part of the growing list of businesses by the entrepreneurial Deer family. (Daniel J. Rowe The Eastern Door)

A convenience store and carwash are perhaps not the most natural next business venture for someone steeped in the construction industry, but for Mohawk Bridge Consortium partner Sterling Deer, his answer was simple.

“Because I have all daughters,” he said. “They didn’t have the interest to go into construction.”

Rapids Distribution Store  opened its doors on the Old Malone Highway Monday following the carwash by the same name that opened in March.

Kayla Deer, Sterling’s daughter, has worked for her father since she was 16 at his Mohawk Painting outfit, but wanted to go a different route from the one her father forged.

“We talked over the years, me and her, and I felt and she felt that she wanted a little bit more of a challenge, so I acquired this place, and thought let’s make something work, give her a challenge,” said Sterling.

Kayla has embraced running the convenience store and all its challenges.

Kayla is not the only Deer running around the building as her sister Kelsey mans the carwash in the back.

“It’s physically and mentally challenging and I love that,” said Kelsey.

A week in, and Kayla is excited to venture into a field she had not previously tried.

“I’ve never worked in a store, so it’s totally new to me,” said Kayla. “There are a lot of things that go with it, a lot of work that goes with it.”

Deer purchased the building from Louis and Pamela Robertson in December 2015, ending the store’s long run at its location.

The convenience store is a one-stop shop for snacks, beer, wine, coffee, chocolate bars and perhaps a slush puppy.

The convenience store is not the last business planned for the space, as Sterling is gearing up to open a third business upstairs.

“We got something planned for that,” he said. “Something everybody likes in the community. Something to do with clothing.”

The second and third businesses are tangible parts of a belief Sterling has for Kahnawake’s business sector.

“There’s always room for growth in different areas of retail and stuff like that as long as you’re willing to put the work in and do it right, the community will accept it and support it,” he said.

“I’m all about economic development. People are calling me every other day for a job, and it’s kind of hard to tell them, ‘you know what. I don’t got a job for you, but I wish I did.’”

Sterling spoke about the declining tobacco industry and his hope that other potential entrepreneurs will follow his lead.

“There’s obviously people out there in the community that need work and the community needs to step up and start opening businesses and finding jobs for these people,” said Sterling. “I said, ‘I’ll do my part, and try to sustain the economy as well as I can.’”

Sterling has around 10 employees in the store, and is always looking to do more.

“As long as there are trees, there will always be money to be made,” said Sterling. “For me, it’s about putting people to work, and seeing the economic footprint of Kahnawake get stronger.”

Though Rapid’s Convenience is just a stone’s throw from the Mohawk Market, he has no issue with potential competition.

“The sun shines for everybody in the morning,” he said. “That’s the way I look at it. I’m sure they’re a successful business and I’m happy for them… I’ll always support anyone in business, any which way I can.”

Kayla and Kelsey now join the always-increasing group of female entrepreneurs in Kahnawake, whose numbers continue to grow.

Her sister did not leave without adding a thought on inspiration.

“She was inspired by me after seeing me run the carwash,” said Kelsey. “I have to get back to work.”