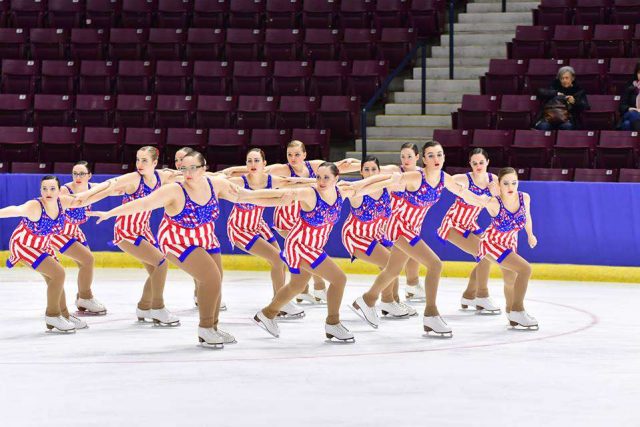 Kahnawa’kehró:non Danika Zachary and Erin Patton are among the 13 skaters on the Chatelaines’ intermediate synchronized skating team. (Courtesy Sylvie Allard)

The Chateauguay Chatelaines’ intermediate synchronized skating team came close to winning it all at the Eastern Ontario SynchoSkate.

The team, which includes Kahnawa’kehró:non Danika Zachary and Erin Patton, scored a total of 68.07 points after two rounds on the ice at the Kanata Recreation Centre in Ottawa’s suburb of Kanata.

“I’m very proud of them since they all have different abilities in skating. This team is an inspiration of hard work, dedication and determination. They started the year with 32 points and going up to 46 between their first competition and this one is extraordinary,” said coach Sylvie Allard.

“We are a small Club and we keep the Chatelaines alive every year. It’s my big family, and is very important to me since I was part of the first team in Quebec in 1977.”

“I feel that we overall had a good skate and achieved a new high score! A silver medal is definitely an accomplishment and a reflection of our team’s improvement,” said Zachary.

A week prior, the Chatelaines were in Calgary, Alberta for the Canadian Championships for Synchronized Skating.

“They took the top six teams in our division and we were within that,” Patton told The Eastern Door. “It was an intense competition.”

They were among six teams competing from Quebec, and came in 15th place with a score of 56.98, after being on the ice at the WinSport’s Markin MacPhail Centre.

“That was our season best, so we’re improving as the competitions went on,” said Patton.

“For us, it was just to go to nationals to experience it. We just wanted to improve upon our score. It wasn’t to win or place, or get a medal. It was just for the experience, it was our first time there, so we were so excited.”

This also marks the second year that the team has been competing at a higher level.

“We’ve skated as pre-novice team beforehand, so it was a jump in the levels, so it is harder than what we’ve skated before. There’s room for improvement,” said Patton.

The two Kanien’kehá:ka teenagers have been skating for over a decade.

“I’ve been skating since I was 3, so for 16 years, and I’ve been skating synchro for about 11 years. It would have been 13, but I took a two-year break,” said Patton. “When I was skating with Kahnawake at the year-end show, they had the Chatelaines skating in the show. I saw that and I wanted to skate with them.”

Zachary has been a member of the Chatelaines for a decade. The team aspect is what was appealing for her to join.

“I never liked to be alone, but I really like to skate, so I felt like synchronized skating is in a group and it looked more fun to do. It’s more of a team thing,” said Zachary.

The Chatelaines will compete in their final competition of the season on March 25 in Trois-Rivieres, but Kahnawa’kehró:non can also catch them in action during the Chateauguay Skating Club’s year-end performance in the spring.