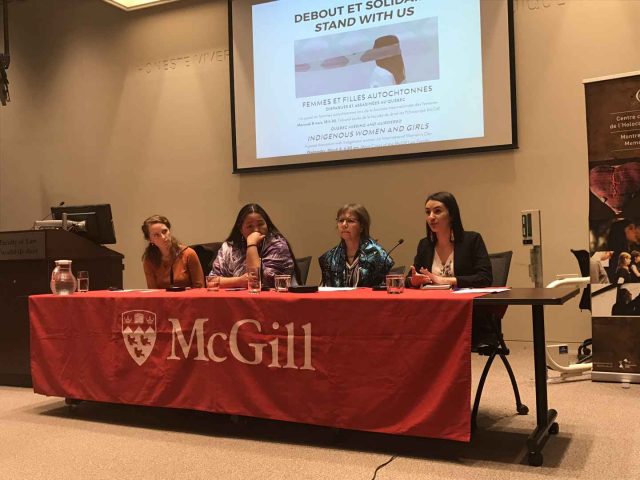 Wednesday was International Women’s Day and McGill University’s faculty of law celebrated the day by hosting a documentary and panel discussion on gender-based violence, the politics of change and challenges of the inquiry into the province and country’s missing and murdered Indigenous women and girls.

The presentation included what the commission needs to do to move forward, including increasing security, intervention and social services and working with police and media to better understand Indigenous realities in the province.

The federal commission was officially launched in September 2016, will host hearings in May, and must be completed by December 31, 2018.

The provincial commission’s launch has not been set yet, but it must be completed by November 18, 2018.

Picard spoke about the goal of the provincial inquiry.

“This provincial inquiry is to look not only at the relationships, but also the racism within public institutions in Quebec,” said Picard.

The film featured interviews with women from the Pine Creek First Nation in Manitoba, and was produced by high school students

The three women spoke about the challenges facing the MMIWG inquiries, obstacles connected to colonization, intergenerational impacts and other issues.

Labrecque-Saganash spoke about the fear many women have coming forward to speak about the violence, and mentioned the situation in Val d’Or where none of the SQ officers accused were charged, as being an example of how the system as failed many Indigenous women.

Segalowitz added that a national inquiry is just one step in a long path towards better justice for Indigenous women.

“The national inquiry is just the beginning. We can’t look at it as the be all and end all,” she said. “We have to keep in mind that we’re asking people to relive something that’s very traumatic, and we have to build that trust, and the national commission needs to prove itself to the communities.”

Segalowitz shared an experience her daughter went through where she was assaulted on the street in Lachine around three months ago by a 59-year-old man, but rather than be aided by a police officer, was questioned about her sobriety.

Her daughter, who knew to be on guard against predators, defended herself with her friend, and the man wound up on the ground.

“She defended herself and as a result, she injured her attacker,” said Segalowitz. “She protected herself and her friend and she ended up hurting him.”

Her daughter, Segalowitz said, called the police and waited for the ambulance.

“What ended up happening in the end is her and her friend wound up arrested for hurting this guy,” she said. “All of a sudden they (cops) asked, ‘well why were you there?’ and that’s colonialism right there.”

The cops then asked Segalowitz if her daughter does drugs.

“I was amazed,” she said. “When we talk about colonialism in Canada and the intergenerational impact of residential schools and the 60s scoop, my daughter walks around that the chances of her getting attacked are a lot higher, and her willingness to protect herself is a lot higher.”

Gabriel had some harsh words for the provincial inquiry.

“The inquiry that’s going on in Quebec is a way to shut up the people, who are complaining about the Surete du Quebec and racism that we have had to endure for many generations,” she said, adding that there is nothing to compel the provincial inquiry to share and exchange information with the national one.

“There’s an Aboriginal industry in Quebec and nationally that profits off of the colonial social problems that we have, and a lot of them won’t want to give up that power,” said Gabriel.

“If the provincial inquiry is not looking at colonization and the root causes, if there’s no mechanism to invoke the human rights obligations of police officers, or if they’re not using a human rights-based approach, that’s going to marginalize and further disempower Indigenous women and the kinds of solutions that we need.”

Gabriel got a perhaps unexpected laugh from the audience when sharing her thoughts on the provincial police force.

“Perhaps there are good police officers, perhaps,” she said with a slight smile. “But, as a whole, they’re part of the problem. I don’t have much confidence in the fact that there will be any kind of relationship between the two (inquiries).”