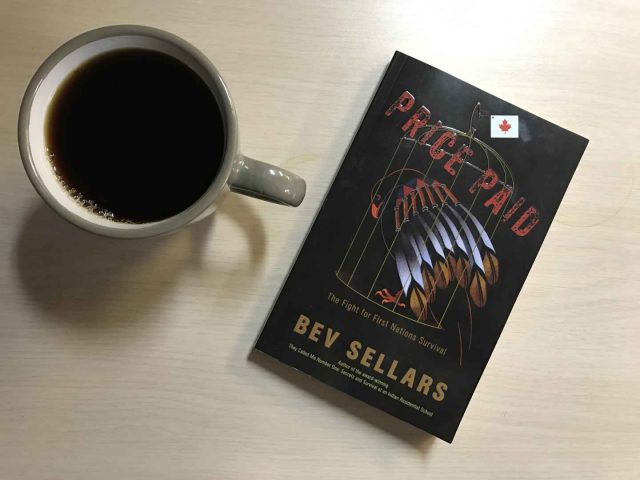 A residential school survivor herself, she is a former chief of the Soda Creek Nation in Williams Lake, British Columbia. Her account of colonialism’s effect on Canada’s First Nations is part history lesson, part law study and part memoir.

“What if you owned a house and beautiful garden? Would you share it with others? Would you welcome them?” The opening words of the book explain the fateful mistrust that was placed in the colonists, which Sellars refers to as ‘newcomers’.

The first chapter titled ‘Indian Givers’ is in reference to the many contributions made by the First Nations to the modern world. For example, European staples such as tomatoes, potatoes and chocolate all originated in the Americas. The miracle material now known as rubber was a product first created by First Nations in Mexico and Central America.

Sellars documents the very real ‘clash of cultures’ between First Nations and the newcomers. Concepts of gift giving, property rights and equality of the sexes meant very different things for the two groups.

“Between 67.5 and 106.4 million Aboriginal people died. You don’t see that in the history books,” she writes.

This is one of the most powerful phrases of the book and is an important fact with respect to calculating the damage done during colonization.

With that in mind the book is an excellent introduction for anyone wanting to learn about First Nations politics and law in Canada. Sellars highlights political and social consequences of the infamous Indian Act, and how reserves were forced to accept the Band Council system. It is written how community members would often elect traditional chiefs but the Indian Act would then be changed so that the Department of Indian Affairs could annul any election it didn’t approve of.

A fascinating chapter was written by her husband Bill Wilson, also a former chief. He documents his meeting to discuss Section 35 of the Constitution Act 1982, which was for Aboriginal rights. There he met colorful figures such as former prime minister Pierre Elliot Trudeau and former Quebec premier René Lévesque, as well as the other premiers of the time.

“The Aboriginal leaders, the prime minister, premier Lévesque, and premier Richard Hatfield from New Brunswick were the only ones who had a clue about the importance of the discussions” Wilson writes.

In later chapters Sellars describes the challenges she faced serving as a chief in her own home reserve. Housing was badly affected by mold, sometimes killing the elderly. Landslides forced some people out of their homes and the local waterways were polluted by industrial and agricultural activity. Population size is on the decline.

“They do not understand that any human would have the same social problems if treated in the same way,” she writes.

This book is meant to do just that, show how the reserve structure holds people back and keeps them in a loop of failure. The book can be depressing to read at times, which is a good thing since it calls on reflection from all Canadians. Overall it combines legal and historical knowledge into a single compact book that should be read by all Canadians.