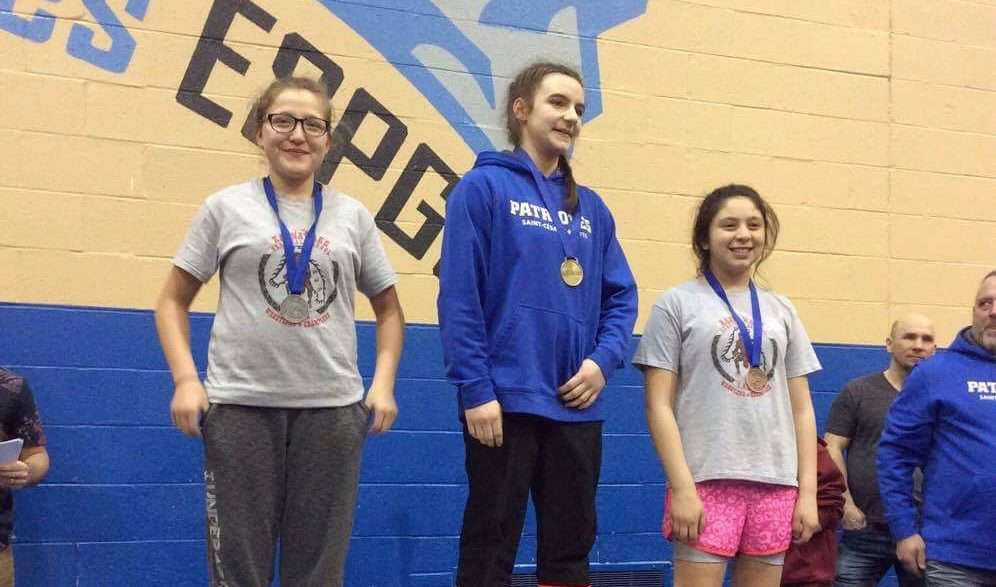 Simply put, it was a great week for the Kahnawake Survival School wrestling team.

The school brought 29 wresters to the Provincial Championships in St. Cesaire last weekend, and the boys and girls in silver and burgundy came home with nine gold, 10 silver and 4 bronze medals.

Coach Peter Montour was happy that he was able to get so many involved.

“It was an 80-group tournament,” Montour said. “So most of our athletes could wrestle at their natural weight. And we brought the whole team between eight and 19 years old.

“It’s really cool to watch because they all support each other. They are backing them up,  the older ones taking the kids off to the side and teaching them things and also watching over them. It makes the little ones feel part of the same team as some of their heroes.”

One of those veteran wrestlers was Kannekihonstha Norton Montour. The 11th grader can now call herself a provincial champion.

“I was happy. It’s always fun to win gold,” said an understated Norton Montour. “I don’t like to brag.”

But brag she should. She had to jump up a weight class to 66 kilos, but still dominated right through.

“Normally I wrestle at 60 kilos,” Norton Montour said. “But I wasn’t nervous because I had to wrestle those girls before in Junior AA’s.”

Norton Montour is just one member of a team that has taken over the KSS mantle from the boys as the team to beat in the Greater Montreal Athletic Association (GMAA).

“All the girls are always at practice and we always put 100 percent in,” Norton Montour said. “We make sure we’re doing our best. But we always have even if we are committed to winning.”

Kawennihtha Kirby is also part of that growing tradition.

“The locals were saying it used to be the boys that KSS wrestling was known for,” Kirby said. “But now it’s also the girls and getting the banners is really great. I’m proud to be part of a team that is known for that.”

Kirby had to go through her own team in order to capture the gold in the 60 kilo class.

“It’s my last year for wrestling in Juvenile,” Kirby said. “It went okay even though I had to face Wenhniseriióstha Goodleaf in the final. Your teammates know your strengths and weaknesses so it makes it difficult to win.”

Kirby said it almost felt like a practice. But going up against the best every day makes you better.

“Yeah it was special since it was my last year,” Kirby said. “I was very happy with that. Champion at 60 (kilos).”

Now it’s off to the Cadet Juvenile Championships the first weekend of April in Windsor, Ontario.

“We have 10 wrestlers who are on the list. But we don’t know if we have room. That’s because we will need $10,000 for that alone,” Coach Montour said.

That’s where the second piece of great news came in for the squad. Kaienta:a Cross made a $5,000 donation to the team at the their practice on Monday.

“It was great,” Montour said. “This is always a stressful time of year because we are fundraising for nationals. This year is a big year.”

A month from now it’s off to the Canada East Championships in Moncton, New Brunswick.

“With him giving $5,000 it’s a big push in that direction,” Montour said. “He’s one of those guys that whenever we are stuck he comes in big for us.”

Kirby hopes that this is finally her year at Nationals.

“My first year I was done after one match,” Norton Montour said. “Last year I got fifth and won four straight matches before losing.”

With the way the KSS girls have been performing it wouldn’t be difficult to see her finally climbing up that podium.

Paddlers get a chance to show their stuff