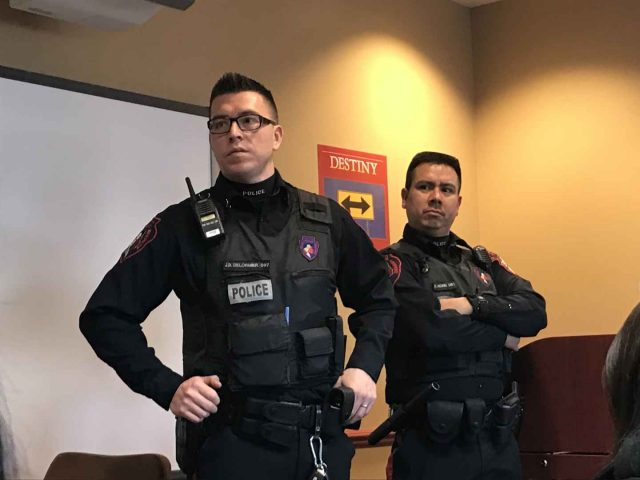 Officers John Dee Delormier and Forrest Horn provided insight into what it’s like to be a Kahnawake Peacekeeper to over a dozen interested Kahnawa’kehró:non looking to join the force. (Jessica Deer, The Eastern Door)

The Kahnawake Peacekeepers are amid a recruitment process to fill just under a dozen positions at the station.

“We have space to take 33 Peacekeepers on our force at all times. Right now, we’re back-filling positions that weren’t filled in the past. People are retiring, (and) there’s been terminations, so we have to fill those positions and that’s why we’re hiring nine at this point,” said Trina Skye, Human Resources Administrator at the Peacekeepers.

Richard “Dickie” White worked his last shift this week retiring after 30 years on the force.

Skye, along with two current PKs, held an information session at Tewatohnhi’saktha last Monday afternoon to provide some insight into the application process and what the job is like to Kahnawa’kehró:non interested in joining the force.

“We’re doing a new initiative to work with employers in the community and outside of the community to try and match your skills with the employers that we can get in touch with,” said Coreen Delormier, workforce development officer at Tewatohnhi’saktha.

John Dee Delormier, who has been a PK for the past five years, said the job posting is currently the biggest need the organization has had to date, and those interested in pursuing a career in policing ought to jump on this opportunity.

“This is the best opportunity because there are a lot of slots that are open. Who knows if there will be this many? Our next foreseeable retirements, there won’t be as many and it won’t be for quite a few years,” he said.

Over a dozen community members were in attendance for the info session, including recent Trent University graduate Kerrin-Lee Whyte.

“In general I wanted to explore what all my options were, I knew that was a path to work towards the investigative route which is what caught my interest,” said Whyte, who earned her degree in forensic science.

“Though I am going to law school in the fall again, I just want to be informed about all my options in terms of career paths that interest me. The experience was good! Very informative, and the PKs that were there were very engaging and real. They were honest about the harsh realities but kept it light hearted.”

Skye provided an overview of the recruitment process, including the initial CV, letter of intent, three letters of reference, and proof of educational requirements that need to be submitted for the application prior today’s deadline at 4 p.m.

Eligible candidates will than be filtered through a six-phase application process that includes an interview, security clearance, medical clearance and drug testing, physical ability requirement evaluation (PARE), and a competency profile, before they are approved and chosen to go to the RCMP Depot training in Regina for six months.

“These six phases could take some time. You’re looking at maybe a whole year before you actually get back from Depot to come work in the community,” said Skye.

“Training is approximately $50,000 per person. We cover the costs of your training, the only thing that happens is that if you’re asked to leave Depot or you choose to leave Depot, then you’d be responsible to pay us those training dollars back that we’ve invested in you.”

Delormier provided some insight into what training is like.

“The whole training program is close to 800 hours, but that’s not including extra practices and stuff like that, so it’s about 975 hours that you’re going to put in a matter of 26 weeks. That’s equal to a bachelors degree,” he said. “You’ll come out of there with the highest level of police training, and they do it in six months. It’s pretty unbelievable.”

Both he, and field training officer Forrest Horn, shared their experiences on the job and why they enjoy it.

Prior to becoming a PK, Delormier was an elected chief at the Mohawk Council of Kahnawake.

“It’s a tough job, but it’s a very rewarding job because you can help people. That’s why I switched careers. I was in politics (and), you had to have a meeting to make another meeting, to sign a document that would maybe start this. It took forever and I got very frustrated with it,” he said.

“A lot of people maybe don’t see it in the media, but we’re always helping somebody,” said Horn, who’s been a Peacekeeper for 12 years. “For everyone one bad thing, there’s 200 good things that we did that you don’t see, and that’s the good part of the job that I love.”

Of course, they said the job isn’t always sunshine and rainbows.

“If it’s not a busy day, you go out and do tickets. You’re required to enforce the Highway Safety Code, so you go out do some tickets,” said Delormier. “There’s some days where it just doesn’t end. We worked powwow weekend in 2013. I was going from call, to call, to call. It was the time there were huge brawls at the Batting Cage, but beyond that there were medical aid calls all over town. It was a big party weekend and people lost their minds that weekend, so we had to respond one after another.”