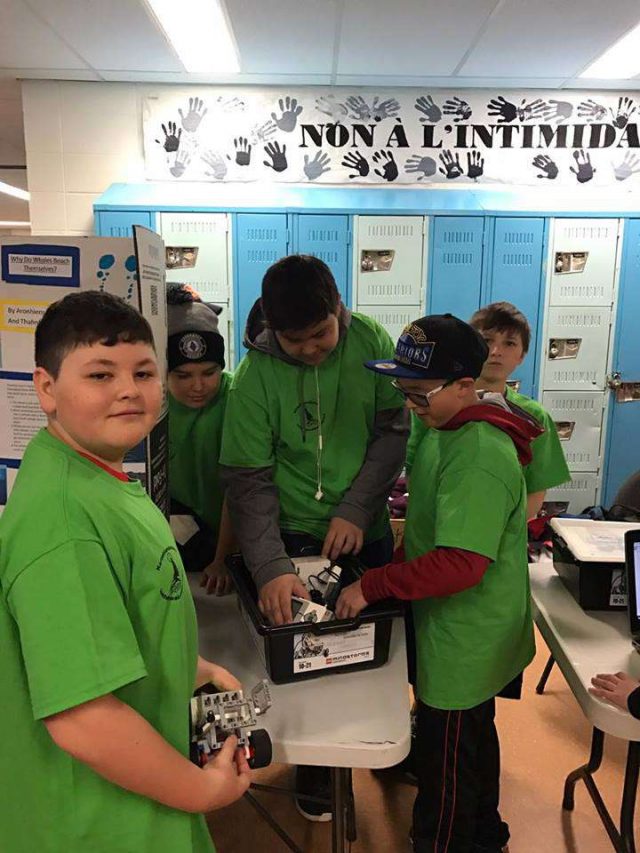 Three teams of elementary students from Kahnawake spent last week putting their science and engineering skills to the test, with one even taking home a trophy for the budding engineers’ accomplishments.

Georges-Vanier high school in Montreal was host to a regional qualifying event for the international FIRST Lego League (FLL) on Friday, with several grade five and six students from Karonhianónhnha Tsi Ionteriwaienstáhkhwa and Kateri School competing.

“It was a long day, but overall, for the kids that are really into it, it was gold. It was like the playoffs,” said Curran Jacobs, a grade five/six teacher at Karonhianónhnha. “Even some of the kids that you wouldn’t expect to be interested in it, all of a sudden were talking strategy, were in the corner planning who was going to what. I think as a program, it’s awesome.”

The competition theme this year was Animal Allies, which asked teams to explore ideas to make their interactions with animals better using a Lego Mindstorm robot to complete animal-themed missions on a playing field.

A panel of judges evaluated the teams on their science project, teamwork and robot design in the morning, while the robot’s performance was put to the test with a number of missions during the afternoon.

“First is an international program that exists in 80 countries and is represented around the world by 32,000 teams, so they are a part of this big international league,” said Rachid Abiza, director of the FLL program for Robotique FIRST Quebec. “The way it works, it has three categories: the robotics, the project, and the core values like team work. So, a team is evaluated on all these three categories, plus how they perform on the robot part regarding the missions.”

This is the second year the elementary schools have been involved in robotics as a part of a pilot project through Youth Fusion and Kahnawake Education Center to spark students’ interest in science and technology.

Jacobs’ science class, as well the grade five French immersion class at Kateri School, spent their entire second term focusing on the competition and the Aboriginal Science Fair, while the pilot project also included an afterschool program to teach students how to build, test, and program the autonomous robots.

The Taco Cats, a team of grade five students from Karonhianónhnha in the robotics after school program, earned the Jury’s Choice Award at the competition. Overall, they ranked eighth out of 27 teams, with the other two local teams finishing outside of the top 20.

“The Jury’s Choice Award is an award attributed to a team who’s is a bit of a rising star in the competition. It is not awarded towards their performance, the project or the values that they have to present during the competition, but more for their overall approach,” said Lydia Risi, project manager for First Nations and Inuit communities at Youth Fusion.

The rookie team’s project focused on balancing hunting and the extinction of animals.

“Their approach was really cultural and ethical, so they discussed some challenges of modern hunting and traditional hunting and how that applies to the real world today,” said Risi.

“I was fairly impressed by their presentation and the fact that all students participated, although some of them were shy. Even though only two students worked on them, when it was the question period, all students were involved in answering the questions.”

The students were beaming with pride when they returned to school on Monday.

“I was shocked,” said Kahahserine Deer about winning the award.

“We didn’t know we were going to go to the competition, we weren’t supposed to,” said Niwakwarihta:a Cross. “So, we had to start coming every lunch.”

The team only found out they were participating a week-and-a-half before the competition.

“I was impressed with them too because the after school kids have been working on robots since the begging of the year, so they have more experience in terms of how to program and all of that, but in terms of working on the missions, they did it in a week and a half, one hour a day,” said Jacobs.

Despite neither of the teams qualify for the provincial competition, Abiza said the experience is one of a kind for participants.

“There are other programs out there that focus only on the robotic part, but the slogan for FIRST is more than robots because it’s STEAM, science, technology, engineering, art and math,” he said. “They explore all these areas through the project, but also they are evaluated on their skills to work together as a group. It all these elements put together, it has great benefits that give skills to the kids for the future.”