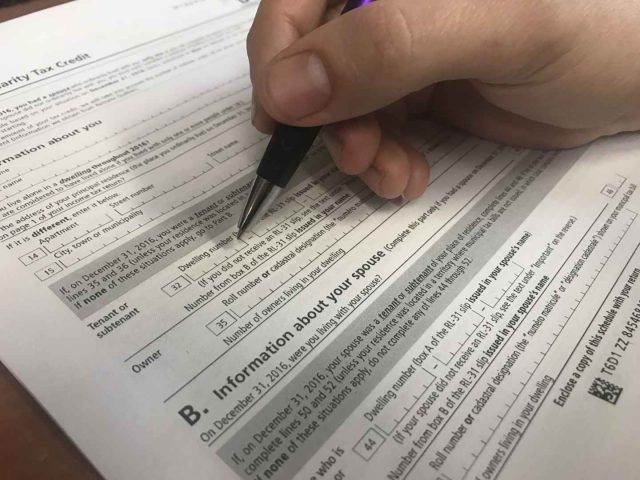 Changes to Revenu Quebec’s Solidarity Tax Credit has some Kahnawa’kehró:non left with uncertainties about whether or not they will be eligible to receive it when they file their 2016 income tax return.

The refundable tax credit, which is aimed at low and middle-income families, now requires proof of eligibility for the housing component that the Mohawk Council of Kahnawake (MCK) says is not available in the community.

“The reason why we’re affected is Revenu Quebec is asking for information that is contained in releve 31 (RL-31), which is a slip that was produced by Revenu Quebec, used by municipalities who identify dwellings within their municipalities with a roll number,” said John Latour, a tax consultant at the MCK.

The change was implemented last year, requiring individuals to provide the new information when they file their 2016 income tax return as proof of residency for owners, tenants, and subtenants of an eligible dwelling located in an Aboriginal community, in order to claim the housing component of the tax credit.

“In the whole province on Quebec, each household is eligible to receive a supplement of just over $600. What has happened province-wide, is that if there’s four adults living in one home, they all applied for it. What really should happen, is that amount should be divided between the four adults,” said council chief Rhonda Kirby, explaining the change in policy.

Latour said Kahnawa’kehró:non who claim the credit will be denied because they won’t be able to provide the proper information required on the form.

“This will really affect those who are on retirement income, most of these people are under the $50,000 guaranteed, so they need the solidarity tax credit. The same thing with people on social assistance,” he said.

In the case of First Nations reserves, Revenu Quebec also advised the MCK that they would be relying on the band councils to complete the RL-31 slip and provide a copy to each individual, as well as Revenu Quebec.

It’s something the MCK never agreed to do.

“The Mohawk Council has already said to Quebec that we are in no position to be able to issue those slips because we don’t have the information,” said Latour.

“We don’t own the homes,” said Kirby. “We’re in a unique situation. One of the things we’re asking for is to have one person working just for Kahnawake, we’re asking if we can have just one contact person in Revenu Quebec who would help us look at the issue.”

Kirby said council is unaware how many Kahnawa’kehró:non file their income taxes every year, but they’re trying to accommodate the situation for those that do.

She said the MCK is advising Kahnawa’kehró:non who normally file at this time of the year to await the outcome of a tentative meeting scheduled with Revenu Quebec on March 1.

“We’re just asking people to hold off for a couple of weeks until we could possibly find some solutions,” said Kirby.

Latour said in the meantime, they hope the province will extend the temporary measures it put in place last year. However, even with that comes problems.

“Last year, I had 300 people come forward with problems with their Solidarity Tax Credit,” said Latour. “People, despite using the temporary measure, weren’t served properly and it created all kinds of issues for different people, like debts owed, benefits being cut for somebody who’s needing that money to make ends meet, it made it a little bit difficult.”