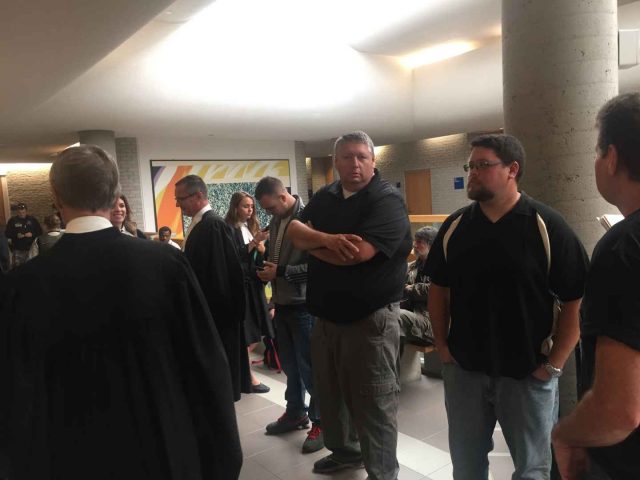 Ronald Jacobs (centre with arms crossed) began serving a one-year jail term for fraud last Friday, while his nephew pled guilty on the same day, and will be back in court for a sentencing hearing in May. (Daniel J. Rowe, The Eastern Door)

After a full day of negotiations between opposing legal counsels, Ronald Jacobs, 45, exited a Longueuil courtroom and was escorted to prison to begin a one-year sentence for fraud.

Jacobs’ nephew Jeffrey, 30, also pled guilty immediately following his uncle’s sentencing, and has a sentencing date for May 3.

Ronald pled guilty to fraud over $5,000 in December in front of a different judge, but pled again in front of justice Marco LaBrie (the original judge hearing the case), who handed down the sentence agreed upon by defense attorney Alain Dubois and crown prosecutor Karim AinMelk.

Dubois said in court that Ronald attempted to find money to pay back the roughly $53,000, but could not.

Ronald admitted the facts of the case Friday, as he had in December, that in 2012 he was issuing permits to private excavation companies without the proper authorization from the Mohawk Council of Kahnawake, which would indicate where and how much landfill these companies were permitted to dump.

He was the landfill office coordinator at the time.

“Ronald Jacobs was allowing the companies to dump extra loads of soil onto private properties in return for payment,” read crown attorney Karim AinMelk in court.

The payments, AinMelk continued, were made in cheque form with Jacobs’ name and then deposited into personal accounts.

In 2013, Ronald asked the companies to issue cheques in the name of his nephew Jeffrey, who then withdrew a large majority of the money.

Jeffrey pled guilty to his part in accepting the cheques from his uncle and depositing them into a bank account.

A representative of his lawyer said that he would also try to find the funds to pay the amount before his sentencing date.

Landfill operations were halted in December 2013 after PKs received information about a potential fraud operation in the landfill department. After a 17-month investigation, Ronald and Jeffrey Jacobs were charged.

Since the charge, landfill operations in Kahnawake have received a higher level of scrutiny.

“The procedures and the policies were tightened up,” said interim landfill coordinator Tracey Snow. “The landfill authority was put in place.”

The authority is made up of Kevin Kennedy, Arnold Lazare and Ken Bourque, and must approve all landfill dumps in the community.

Outside contractors must include a full soil characterization report before they can receive a permit after an environmental assessment.

Snow added that those in Kahnawake who suspect nefarious landfill or dumping operations are asked to notify the landfill office or the Peacekeepers immediately.

“A lot of what we rely on is community watch, but we do have Bruce McComber, who is the surveillance officer, and this is one of his main priorities, to look for these types of activities, because we’re really trying to get the message out there.

“Even moving landfill from A to B within the community from a neighbour’s house to down the street, let’s say, we want to look at the material before it’s moved,” said Snow.

“We’re asking anybody and everybody, if you’re moving landfill in the community, to notify us because we have the community on alert.”

Mohawk Council of Kahnawake press attaché Joe Delaronde emailed a response to the sentencing this week.

“The MCK acknowledges that Mr. Ronald Jacobs has pleaded guilty in this matter, and, to our understanding, will serve jail term,” he wrote. “This almost concludes one of the more difficult and unpleasant challenges we’ve had to face in a long time.”