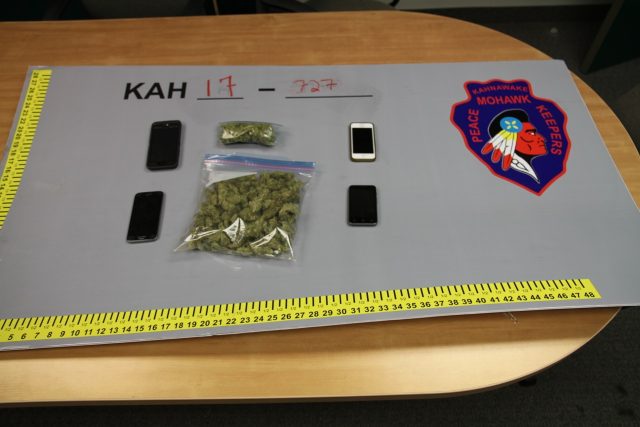 A local man was charged with possession with intent to sell marijuana this week after a tailgating incident led to his vehicle being searched and suspected drugs seized.

According to a Peacekeeper report, investigator Larry Beaton was on routine patrol last Friday at 8:34 p.m. on Kirby Road when he noticed a pickup truck approaching at a high rate of speed. The truck drove through two stop signs, past a marked PK squad car that was watching stop signs on the Old Chateauguay Road.

The truck continued behind Beaton’s unmarked van and began tailgating the van up to the Blind Lady’s Hill/OCR intersection. Beaton advised patrols of the situation and stopped the truck.

Beaton then approached the driver, who he recognized, and the local said he thought Beaton was someone else. While speaking with the male, Beaton detected the scent of fresh marijuana.

PK Wahiio Jacobs then arrived and, while Beaton was checking the driver’s documents, removed the man from the vehicle and noticed a large bag of suspected marijuana in plain sight.

Skaionhiio Stacey was arrested, a tow was called and he was brought to the station. Another small baggie of suspected marijuana was found on the back seat as well.

The total amount of suspected cannabis seized was 134 grams, along with four phones and 17 rounds of .308 rifle ammunition.

After consulting the crown, the PKs were advised that an arraignment would take place Saturday morning and once Stacey was arraigned, he was transported to the Riviere des Prairies detention centre.

He was charged Monday with possession of cannabis with intent to sell and released under his own recognizance. He is under conditions to remain living at his current residence, keep the peace, not possess or handle firearms, and not use or have a pager or cell phone.

He will appear in court April 24.

CLARIFICATION: The original story published February 17 read that Stacey “is under conditions to remain at home.” The condition does not mean house arrest, but rather to maintain his residence in Kahnawake and reside there only.