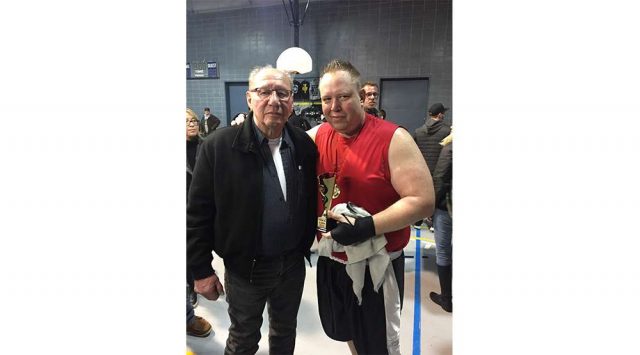 It doesn’t get any better than having your dad watch you win. (Courtesy Brad Gabriel)

Over the course of “Bad” Brad Gabriel’s fighting career – which includes kickboxing, MMA and boxing – he’s always had that awe factor.

He pulls people out of their seats just by stepping into the ring. Not necessarily because he’s a beefy, imposing figure, but because he just looks, well, “bad.”

His explosive lefts, feared equally by his devastating rights, have earned him a fierce reputation.

So there he was, the heavyweight bout at Howard S. Billings High School last Saturday, the 46-year-old, six foot, 294-pound Kanesatake legend who now calls Kahnawake home, sparring with a much younger, more fit opponent.

When he went to register for the fight, in fact, they were surprised at his age.

“They looked at me and said ‘what are you doing?’” Gabriel laughed. “When was the last time you fought?”

Despite the 20 years since his last boxing match, the result was something you write books about.

The fight wasn’t without its challenges, of course.

Brad was hit with tonsillitis and then fell sick with the fever leading up to the fight – losing a number of days of vital training. It was only Tuesday before the fight that he was able to put in a good session to prep for Saturday, but his sickness cost him his footwork and speed.

Add to that an inability to throw right hooks and uppercuts thanks to a wonky rotator cuff, and his corner had to adapt his fighting style on the fly – to a slower, walking style, careful bobbing and weaving, strong defence and counter punches.

“My legs were not there. There was no spring in them. So the biggest thing I had to do was look for the opening and when it came, hammer him with everything I had,” he said.

The first round was a feeling-out process, but by the second Brad was warming up, including a left hook that “cracked him one, and hurt my left shoulder as much as him.”

His opponent wobbled and took notice, and the tone was set.

Once the third round hit, he was landing more punches, especially in the last 10 seconds, where nostalgic fans saw a glimpse of their hero from of yesteryear, as he ended the fight with a flurry of combinations that must have had his opponent thankful there wasn’t another round.

“The biggest thing I was able to accomplish was to control the pace of the (third) round,” said Brad, who ended up with the decision and the win.

Brad fought his last fight for his equally pugilistic father Milton, 75, who was sitting front row next to his son’s corner, and who many know never backed down from a scrap in his day.

He also fought for his daughter Autumn, 21, and his 13-year-old son Iorahkwano, who never saw his dad fight before, but who came away awe-struck, no doubt.

For those who remember Brad fighting in Mike Thomas’ Tough Man competitions in the mid 1990s, you know exactly what he brings to the ring – notably when he fought and beat Ben Pinsonneault, a masterful boxer, by decision.

When he met coach and mentor Ron Di Cecco in 1995, Brad’s entry into organized fighting, after being feared on the playground, in the bars, and the streets, changed his life.

“I was drinking too much, partying, and I needed a change,” he said. “When I look back, it was just a big waste of time.”

With four MMA fights, 10 or so amateur boxing matches, and roughly a dozen amateur kickboxing fights, fighting has always been his life.

He’s fought an assortment of opponents, all of whom came in with their own machismo and solid rankings, but it was a rare site to see Bad Brad fall vulnerable in the ring.

In his very first kickboxing fight, for example, he dropped the guy 42 seconds in.

When a special non-Natives vs. Natives competition was held in Kahnawake, it started out as a total debacle – the non-Native side brought ranked, skilled fighters to the round-robin tournament, instead of what was agreed upon: every day tough guys with regular jobs.

Bones were broken, arms were fractured, and ribs were cracked, and when the Native team was down one fighter, Brad knew he had to do something about it.

“I told Mike Thomas if you can get me a pair of shorts that will fit me I’ll go in and at least try to win one fight for us. CBC News was there covering it, it was a big thing,” he said.

It wasn’t long before he made an impact.

Bad Brad entered the ring with borrowed shorts from fellow fighter Frank Laughing, and, with steam coming out of his ears, took out Chuck “The Truck” in one minute and 45 seconds.

In his next fight he took another guy out.

Then, in the final fight of the night, for all the marbles, he fought the best guy there – top ranked Jean Riviere.

“He was a very serious opponent. I ended up beating him and winning the night. It was kind of a storybook tale to tell my kids,” he said.

What did Bad Brad Gabriel take from his last fight of his career, his parting words of wisdom?

“My dad never backed down and I tried, in a way, to follow in his footsteps, but I knew I never could.”