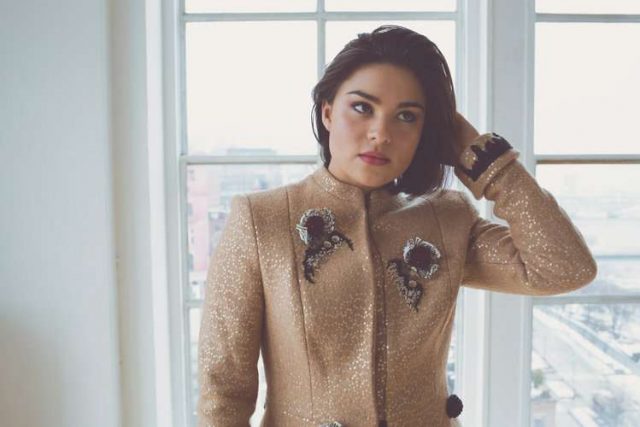 Decked out in a costume for her latest role in a fantasy feature film, the 24-year-old strutted down the runway as a part of a Patricia Michaels’ fashion show at New York’s Style Fashion Week.

“It was amazing. It was so exhilarating and scary, but awesome at the same time. I’ve done some petit modeling, but I’ve definitely never done anything like this before,” said Jacobs.

“I’m obviously not a model, I’m like five-foot-nothing, so to be walking in New York Fashion Week – it would have never happened otherwise.”

A part of Michaels’ latest collection is dedicated to her son Gabriel Mozart Steven Abeyta’s film The Beginnings of My Heart, an experimental feature about a Native girl who confronts her past traumas through four spirits that have stolen her exploded heart.

“The story is so different from anything I’ve read before,” said Jacobs, who is cast as the lead, Heart Girl. “It’s really interesting, there’s no fantasy films out there really, or contemporary ones that are like this.”

The script went through the Sundance Institute’s Native writers’ lab and now Abeyta is raising funds to make the film through the crowd-funding site gofundme after a Kickstarter campaign did not raise the $28,000 needed for the film

“In order to make this, we need to meet our goal and as far as feature films go, asking for $28,000 is minuscule in comparison to how big budgets usually are. Any little contribution would mean so much,” said Jacobs.

Michaels, a finalist on season 11 of Lifetime’s Project Runway, will also be designing the wardrobe and costumes for the film.

“The artistry of the film is important to what I believe in. I think as Native Americans, we’re pegged to do something that is expected of us, otherwise it’s not Native American,” said Michaels.

“This film is really taking a chance on subject matter, the sets are very exciting and is something new. It’s that whole taking a risk, going out on a limb type of film and that’s how I treat my fashion.”

The modern collection is inspired by her Taos Pueblo culture.

“It’s like a part of a painted eagle feather that I do, but it’s a single paint stroke. So, it’s very linear and minimalist in the execution, because I wanted to almost leave a really pure, clean pallet for people to start recognizing what we have to say as Native Americans with our voice,” said Michaels.

“It’s also about having the old ancient white on black pottery. Some of those are abstracted and enlarged, so it becomes a part of that modern statement.”

Specifically for Jacobs’ wardrobe, Michaels collaborated with her son.

“He wanted the stark black silk to drape and it had to be a short skirt, so it’s about revealing her inner-self and finding her self through different life experiences. The body is a part of that, which she’s not ashamed to explore her different options in life,” said Michaels.

“There’s this beautiful red scarf that juxtaposes the black and kind of picks her out of the audience so that she doesn’t just get lost in the crowd, because we need to be with her on that journey.”

Those interested in making a donation to The Beginnings of My Heart’s gofundme campaign can do so here.