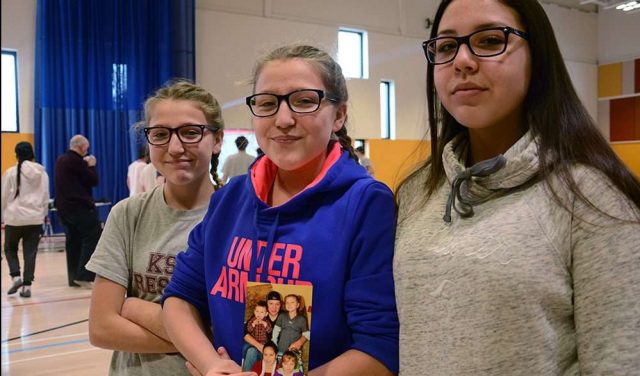 Jordyn, Winter and Watewennenhawihtha Goodleaf were shocked, but strong this week, after the sudden loss of their father, 34-year-old Winston Goodleaf. (Daniel J. Rowe, The Eastern Door)

In the first match of the GMAA all-star meet at Vincent Massey Collegiate in Montreal last Thursday, Jordyn Goodleaf stepped to the centre of the mat and squared off against Alexa Grimaldi.

Jordyn dominated the match and pinned Grimaldi to the huge applause of her team, family and friends, who knew this one was special.

The two matches later, her twin sister Winter faced Krissia Kruikshank, and though it took her a round longer, got the pin, to more cheers and tears.

The 13-year-old Kahnawake Survival School wrestlers battled a week much tougher than their grappling opponents yesterday, as they lost their father Winston Goodleaf, 34, who died early last Wednesday morning in his sleep.

The girls decided to wrestle in honour of their father who also wrestled for KSS under coach Peter Montour.

Winter said her father never interfered or pushed her too hard in the sport, but rather related how it was for him when he donned the silver and burgundy.

“He told me a lot of stories of what happened when he used to wrestle,” said Winter.

The two girls had a team and much more cheering her on.

Sitting front row on the ground beside the mat was another of Winston’s daughters Watewennenhawihtha Goodleaf, who had her iPhone out the entire time to preserve the memory.

“I wanted to support them,” said Watewennenhawihtha, 13, who was beside Jordyn and Winter’s mother Jayme Ann Bordeau and Jayme Ann’s oldest daughter, Raven Horn.

Watewennenhawihtha transferred to KSS from Kuper Academy, and has been able to count on the support from her sisters, who she isn’t classmates with.

“We’re all the same age pretty much, so we’re all handling it the same,” said Watewennenhawihtha. “We get to talk about it.”

Kahnawake Peacekeepers confirmed that there is no foul play suspected, and that an autopsy will determine the exact cause of Winston’s death.

Facebook exploded immediately with friends and family speaking about the loss, and the wealth of friends and memories Winston leaves behind.

Upon hearing the news, Bordeau rushed to Survival School first thing Wednesday morning to pull the girls out of school, shocked and desperate to be the ones to tell her girls what happened.

“I was in the office, and my mom went in to tell me, and then when I walked out a lot of the teachers already knew, and some students already knew,” said Winter.

“After that, people were asking me what happened, and I would just kind of ignore them because I didn’t want to answer any questions because I wasn’t sure what happened yet. There was a bunch of rumours about what happened.”

Watewennenhawihtha heard the news at school, and is still trying to process everything.

“I was told at school, so I left to see my family at the hospital,” she said. “It was really sad when I first found out. I think I was still kind of shocked. I feel like in a couple of days or a couple of weeks, it’s going to hit me really bad.”

Watewennenhawihtha’s classmates, like her family, have been a constant support.

“I went back to school because I had to set up for the science fair, and everyone was coming up to me and hugging me and asking if I was okay,” she said.

Winston’s family ask that in lieu of flowers, those wishing to show support make a donation to the Kahnawake Youth Center or Kahnawake Minor Lacrosse.

Winston’s daughter spoke about what kind of person her father was, and the void that will be left for his family, friends and community.

“He was very friendly. He had a lot of people who knew him,” said Winter. “He was kind of shy a little bit, I find. If he met a random person, he would be shy, but if you were his friend, he would be outgoing.”