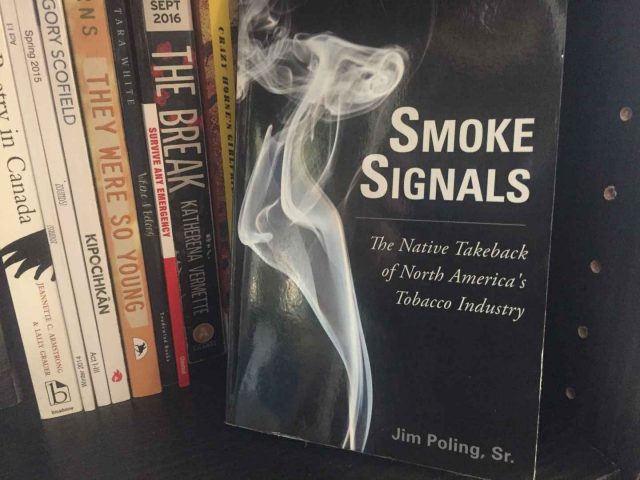 The task for Jim Poling was large, but the former Canadian Press writer was up for it, and the result is a fascinating look at the history of one plant that is the source of controversy, tension, politics and a whole lot of money.

If someone wanders into Kahnawake with no knowledge of the community or its history, it is reasonable to assume they will ask something along the lines of, ‘why are there so many smoke shacks?’

Now, rather than taking an hour or so to explain the history of tobacco from the earliest ceremonial uses of the plant to the growth of the local cigarette industry, you can just hand them a book.

The book is Smoke Signals: The Native Takeback of North America’s Tobacco Industry (Dundurn Press, $24.99) by Jim Poling Sr., a readable and interesting relatively short history of tobacco, its uses, controversies, production, sale, taxation and just about anything else that comes to mind about the product.

The book’s ambitious timeline spans from the end of the last ice age to relatively recently.

If you’re asking how Poling is able to do it in 223 pages, the answer is, ‘read the book.’

Poling is conservative with his words, and effective in his storytelling. He spends little time editorializing on the subject but sticks to the basic known facts, and what is commonly understood about the subject.

Chapters range from tobacco use in the military, the evolution from pipes to cigars to cigarettes, the “contraband” issue, overseas production and illegal activity, and events related directly or indirectly to the tobacco trade.

The book shines light on parts of the tobacco and cigarette industry that many may not know, as well.

Take this interesting anecdote on the development of the cigarette:

“The biggest boost for cigarettes reputedly came as the result of a mistake by a sleepy teenager in the 1840s North Carolina,” Poling writes.

“The lad was tending the smouldering fire that produced smoke for a tobacco-curing barn. He fell asleep, and when he awoke found the fire was out. Knowing that this could get him in trouble, he went to the blacksmith’s forge and got burning logs to revive the fire. These produced hotter smoke than the tobacco required, and the leaves turned yellow and cured in two days, instead of the usual couple of weeks.”

Bright leaf tobacco is born, and a more milder, pleasant leaf is ready to be smoked by many.

Throughout the book, Poling is careful and tactful in acknowledging both sides of the argument, a skill no doubt honed as an Indian and Northern Affairs writer for the Canadian Press.

When dealing with a subject as potentially flammable (pun intended) as tobacco and Indigenous rights, there are many points where a less-experienced or less-informed writer could have stepped on a land mine or two.

Poling is respectful of the industries, but also the governments who are often stuck between depending on the enormous money from tobacco taxes, and the powerful and vocal anti-tobacco groups concerned with health care costs.

Add to that the need to respect an inherent right to trade tobacco for Onkwehón:we and it is clear that there is no “right answer.”

Poling highlights the many hypocrisies on both sides of the border when it comes to tobacco and its connection to crime. He details incarceration statistics, poverty smoking rates, and other socio-economic factors that make the industry so complicated.

In one of his rare moments of near editorializing, Poling chides governments who confront Indigenous communities that are protecting their inherent rights.

“Politicians need to rethink the use of combat forces, military or regular police in confrontations with Natives,” he writes.

“Occupations and demonstrations by people who believe they have been treated unfairly require patient and skillful negotiations, not reactions that might escalate emotions and turn violent.

“The mortar holding Canada together has always been honest negotiation and thoughtful compromise.”