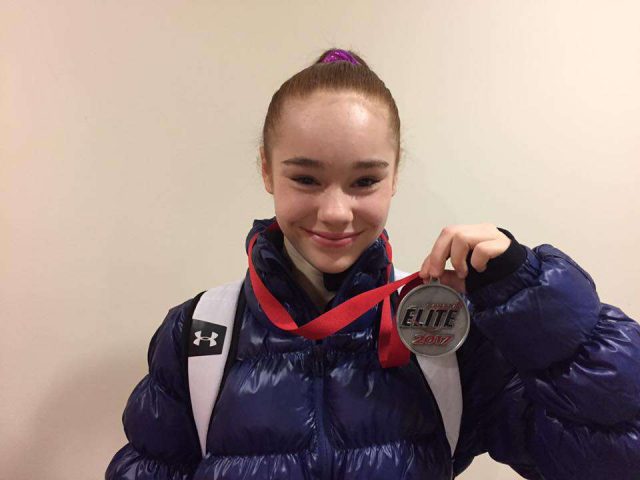 Megan Phillips was the Senior AA gold medalist for the beam event at the 2017 Elite Canada gymnastics competition on Sunday. (Courtesy Francine Bouffard)

Megan Phillips competed against some of the top gymnasts in Canada this weekend, taking home new hardware.

The 16-year-old won a silver medal for her overall performance on Saturday against two-dozen athletes in the Senior AA category at the 2017 Elite Canada Gymnastics Competition, which was hosted by Gymnastics Nova Scotia in Halifax from February 2-5.

“I’m really happy. I kind of just stayed focused and hit my routine. I tried to not have any wobbles, and that really played to my advantage,” said Phillips of her beam performance.

“On floor, I did a new element, so I was proud to hit that for both days. It’s an Arabian. It’s a double back flip with a half twist in the beginning.”

Saturday’s competition was also a qualifier for finals in individual events on Sunday. Qualifying for three out of four events, Phillips earned a gold medal for her beam routine, a bronze on the floor, and fourth on bars.

“It was her first year as a senior, so there was no expectation about ranking, medals, or anything like that,” said Francine Bouffard, one of her three coaches.

“She trained very, very well – not being intimidated by the others who are more experienced than her because she’s a first-year senior. She was very calm, of course a little bit of nerves here and there, but a very good focus and she managed to hit all the routines.”

Elite Canada is one of the primary meets where national team status is determined and brings together athletes from across Canada from the Novice, Junior and Senior categories.

The competition also gives athletes high performance status, which gives them the right to compete at the Canadian championships and to be eligible to be considered for national teams, and potential international assignments.

“By doing the competition we did this weekend, she is now a high performance athlete. She was before as a Junior, but she had to re-qualify as a Senior, which was quite easy for her,” said Bouffard.

Phillips has been doing gymnastics for 12 years, and currently trains approximately 30 hours a week at Gymnix in Montreal.

“I started when I was four years old. My mother just wanted me to do the sport, so she basically applied me to a gym. I like doing flips – I like the feeling like I’m flying,” said Phillips.

“Most of my elements, I’ve been practicing them for years. It’s been years of practice. Sometimes, when a harder element is ready, we’ll try to fit it in, but usually that takes a lot of time.”

She’s one of six athletes with the club who have their eye on the Tokyo Olympics in 2020, as well as the National Collegiate Athletic Association championships in the United States, after she graduates from high school next year.

“She proved that she can be there among the best,” said Bouffard. “This is the senior competition, so the oldest and the best in Canada. A few of the best, best, best were there, including girls who went to the Olympics last summer. One of the Olympians did the four events, but Megan was able to beat her.”

The grade 10 high school student is back on the road this weekend to compete in the Nadia Comaneci International Invitational in Oklahoma City.

Later in March, she’ll compete at the 26th edition of L’International Gymnix in Montreal, as well as the Canadian Championships in May.

“I’m hoping to pretty much do the same thing, just try to stay consistent,” said Phillips.