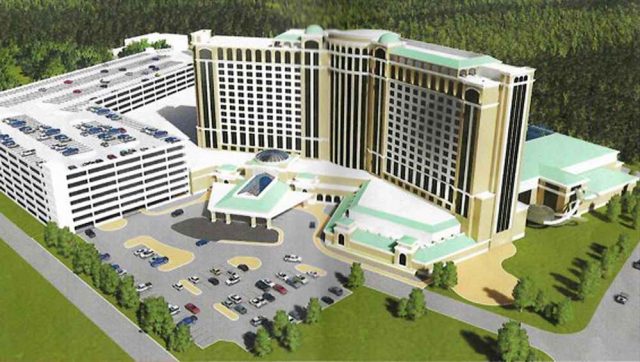 Ambitious may be an understatement for the hotel, water park and casino proposed by local entrepreneur Lee Thompson. (Courtesy Lee Thompson)

It seems to be the mantra of local entrepreneur Lee Thompson, who proposed the following statement in a petition that has been circulating for a week:

“We, the undersigned Mohawks of Kahnawake, of free will and legal age, support a casino within a privately owned indoor waterpark resort destination to be built in Kahnawake.”

The petition reads that 80 percent of the revenues from said casino, after expenses, would go into an independent fund operated by a board comprised of Kahnawa’kehró:non, for use throughout the community in places such as health and education.

Thompson’s team began circulating a petition last Friday hoping for 850 signatures, which would be more than the “no” votes at the last casino referendum forwarded by the Mohawk Council of Kahnawake in 2012.

Karrie Lacroix, Thompson’s mother, said the petition was doing “very well,” but would not give an exact number on how many signatures have been collected to date.

Thompson and Lacroix, and associates Burgess and Arlene Diabo and Arakwante Curotte, met with media from across Kahnawake Tuesday to talk about the proposed 20-storey, 800-room hotel with an attached 150,662 square-foot waterpark, along with a conference centre, and rooftop restaurant.

“It was just a thought 15 years ago to do a hotel/waterpark,” said Thompson. “Then they were doing their casinos with council and it was always getting shut down. Then last year I said, ‘let’s do it. Let’s see what the feasibility study’s about and if it’s feasible.’”

It was then that Thompson considered adding a casino to the project, with 80 percent of the net profits from the casino going to a community fund. Informally, he began asking if those who admitted they voted ‘no’ in previous referendums would consider supporting a private venture.

“It was a grassroots movement, it was only his friends and family that got together and more or less he said, ‘go out and see. Let’s get a feel of what people think about the project. See if there’s an interest,’” said Lacroix.

Mohawk Council of Kahnawake grand chief Joe Norton told The Eastern Door last year February (vol. 25 no. 7) that community members had approached him with the prospect of a privately-run casino.

“I’ll just get to the forefront about casinos,” said Norton last year. “Up until now, it’s strike three for the council, and approaching it from that point of view it has been shot down, so we have to accept that as a fact of life, but it does not prevent community members themselves from organizing themselves and approaching the community and saying, ‘let’s have a community casino, and let’s share in the profits.’”

Norton was at an AFNQL meeting this week and did not respond to requests for an interview with The Eastern Door, however gaming portfolio chief Gina Deer said she hoped the Thompson team would have contacted the Kahnawake Gaming Commission or the MCK before making this week’s announcement.

“I would have to say that we’re off to the wrong start,” she said. “What needed to be done was discussed in some preliminary meeting that happened on April 6. We were shown a proposal, and there was discussion of a casino later on as part of this proposal. From then on, we’ve just waited to hear back from Lee Thompson and Karrie Lacroix and we didn’t. Instead we heard about a petition that has been circulating in the community.”

Deer also responded to the suggestion that the “no” vote in the referendum was due to the community’s objection over council running the casino, and that concerns have arisen over the proposed private casino.

Thompson said the casino will operate transparently and books will be completely open to the community to guarantee the 80 percent profit number would be known.

“The community’s never going to own it. It’s private. However, the community’s going to have a say in how that 80 percent is distributed,” said Arlene Diabo.

Thompson said the 80 percent figure would be written in a contract that will be passed on in perpetuity to his children. The board would consist of around seven community members with experience on boards in the past, and will be elected and separate from the proposed casino’s management team.

The goal is to ensure the 80 percent figure is completely out of Thompson’s hands.

“There’s lawyers and binding contracts, and then when I die, it’s passed on to my kids,” said Thompson. “We can do it for 500 years… I’ve got nothing to do with it. You get your 80.”

Lacroix and Thompson said there would be no bingo or poker at the casino, to avoid competition with other establishments in Kahnawake.

Council is “100 percent not involved in this” as far as ownership goes, Lacroix said, however she knows that council will play a role as the project proceeds, particularly in any arrangements made with the federal and provincial governments.

“The presentation (in April, 2016) to council was not made to get approval, it was as a courtesy so they’ll be on board and they’ll know what’s happening,” said Arlene.

The proposed casino, if opened, would be the sole privately run Onkwehón:we casino run on either side of the border. Akwesasne’s Three Feathers Casino, run by the Men’s Council of the Way of the Longhouse, opened privately for a brief time in the 2011, but a raid, which included St. Regis Tribal Police and US authorities, forced it to shut down in 2012 because it was deemed illegal.

Thompson’s team has not met with the Kahnawake Gaming Commission yet to inquire about a permit, which does not exist at the moment, as confirmed by KGC chairperson Mark Jocks.

The Eastern Door asked Tewatohnhi’saktha CEO Kyle Delisle what role the economic development commission would have in relation to a casino.

“If the casino/waterpark/hotel does go forward, then we would provide the same support to this business as we would to any other business start-up,” he said.

“I do not think they will need any financial assistance from us, but they may need help in other areas such as liaising with the MCK and other levels over government, training of employees, advising, etc.”

With any business venture in Kahnawake, questions arise about relations with Quebec and Canada very quickly, and how outside governments will interfere or effect local businesses.

Lacroix knows full well that a policy regarding tax will need to be ironed out before the establishment opens its doors. She spoke to The Eastern Door about a previous issue she had with Canada involving a 15 percent tax Canada required her Maddie’s Place establishment to collect from performers using her concert venue.

Lacroix has not paid that tax bill, but to fight it legally, she said, would be too costly.

The Thompson team is depending on the MCK to find a way for Quebec to not influence the project with taxation, language or other laws.

“We need our council to combat the governments, federal and provincial,” said Lacroix. “That’s their job.”

Deer has been across Canada and the United States and seen the benefits and struggles casinos have in Onkwehón:we country. Tax arrangements are difficult for many communities’ publicly-run casinos.

“One of the concerns that some of the casinos outside have is the agreements they’ve had to make with their provincial governments,” she said. “Some of those agreements, they have to pay back 30 percent to those governments. That’s concerning.”

Deer added that the agreements have always been made on a government-to-government basis and a privately-run casino would be new territory.

“That’s the issue around privatization, who are you bringing in?” she said.

“When it’s your local government and collective benefit then you know exactly who’s coming in and how the money is being spent and everything is transparent and accounted for.”

The casino project would also stress local language customs in the hopes of providing more employment for community members.

“It’s written right in there, Mohawk and English is necessary,” said Lacroix. “French is an asset, but we’re not saying if you don’t speak French, you don’t have a job.”

Thompson said there have been no formal discussions with investors though some were contacted as part of the feasibility study for the waterpark and hotel.

“They’re interested,” said Thompson, who would not disclose any potential investors.

Thalden Boyd Emery (TBE) Architects, a casino, hostel and hospitality-related firm, has built casinos in Onkwehón:we communities both sides of the border, and is the firm who drew up the plans for Thompson’s project.

When The Eastern Door asked about costs to this point, Thompson estimated roughly $200,000 to $250,000 USD has been spent on a feasibility study a few years ago without a casino attached, as well as the current plan that is being circulated, plus other costs.

Lacroix explained that any investors would not have an ownership stake in the establishment.

“Basically, you’re trying to pay off those investors and get them the hell out so that you do have control of your business,” said Lacroix.

A water treatment plant just for his building would be built, if necessary, Thompson said.

Lacroix insisted several times that the plan currently is just to gauge community feeling via the petition and an information booth set up at Maddie’s Place, where community members can ask questions and view the proposed plan.