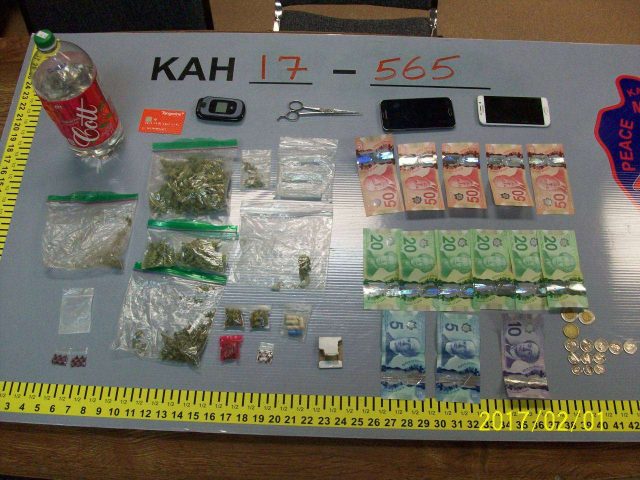 Officers seized an assortment of drugs, cash and cell phones after a drug bust under the Mercier Bridge this week. (Courtesy Kahnawake Peacekeepers)

Peacekeeper Cody Diabo stopped a vehicle on Highway 138 Monday night just after 11 p.m. for running a red light, but the traffic infraction was just the start of the trouble that led into an early morning arrest for drug trafficking Tuesday.

According to Diabo’s report, the female driver of the grey 2009 Nissan Ultima from Montreal North, who had a male occupant in the passenger seat, told the officer that she was lost and looking for Montreal, and then that she was buying gas in Kahnawake.

After being directed to the Mercier Bridge, Diabo observed that the car took the access road to Highway 132 instead and pulled under the bridge and turned on her hazard lights for about 10 to 15 minutes.

Then, Diabo observed a white Oldsmobile Intrigue approach, and the male occupant walked to the other vehicle with a bag and spoke to the driver.

The Oldsmobile took off in a different direction.

After requesting support, officer Kelvin Phillips intercepted the Oldsmobile, whose driver said he was coming to see a friend in Kahnawake. All documents in the vehicle were valid.

Upon a second stop of the Nissan, the male passenger told officer Landon Meloche that he met a friend to give him money. Montour noticed a bag of suspected marijuana on the floor and that the male kept reaching into the back seat for a red backpack, while officer Diabo was performing a CRPQ check.

The female driver and male passenger were arrested on suspicion of drug trafficking and brought to the station.

The male, Jean-Jacques Lochard, was found to have a small baggie with two white rocks suspected to be crack cocaine and around $400 cash on him.

A search of the bag found three plastic vials with clear liquid, five pills, and eight bags of suspected marijuana.

The female, Fedeline Brunelus, was released on a promise to appear in court and has been formerly charged with possession with intent to traffic marijuana, cocaine and crack cocaine.

Lochard was held, as he was in breach of parole conditions, and had a warrant with the SPVM. He was charged with possession with the same drug trafficking charges as Brunelus, along with two breaches of conditions.

Other charges may be forthcoming, as an analysis is needed to determine the unidentified liquid that was seized.