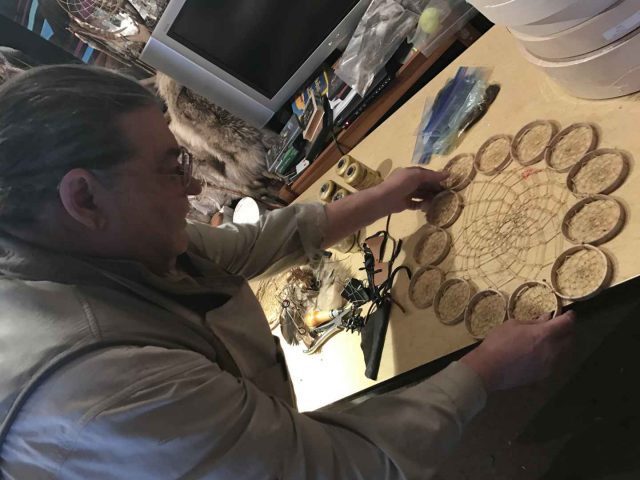 Artist Nick Huard will be taking his skills across the country to teach youth in Canada how to make dreamcatchers. (Jessica Deer, The Eastern Door)

With a focus on reconciliation and inclusion, three Kahnawa’kehró:non will be a part of a Canada-wide project exploring young people’s dreams for themselves and the country.

Between February and April, artist Nick Huard and his assistant Watio Splicer will travel to each province and territory to teach youth between the ages of 11-13 how to make dreamcatchers.

“Our youth are our future ancestors and their dreams are impressive,” said Huard, a Mi’kmaq born in Listuguj who resides in Kahnawake. “This project encourages them to imagine, gives them a voice and a chance to represent themselves. We want to remind them to keep dreaming because dreams can become reality, and the dreamcatchers reminds them to pursue the dream the creator put in their hearts.”

Huard will be incorporating all the dreamcatchers made by youth into a 20 by 28 foot piece that will hang in the Confederation Centre of the Arts in Charlottetown, Prince Edward Island.

The idea for the project, which is organized by the centre as a signature event for Canada’s 150th anniversary, stemmed from a similar concept Huard did with the Membertou First Nation (Mi’kmaq) in Nova Scotia.

“I built a 12-foot dream catcher that has 212 dreamcatchers from the children of Membertou that participated. That transpired into eventually making for Canada,” said Huard.

“It’s great because if we consider Canadian unity, they just opened up the door, so we may as well take it and do something with it – bring in our participation and get our words to be heard.”

In addition to the three-month workshop tour, playwright Marie-Frances Moore will be looking for inspiration from the participants to create a performance that is going to tour during the summer.

“The whole idea behind it is to really encourage the youth to never stop dreaming and to see the importance of dreams and their future,” said Stephanie Ripley, an associate producer in the theatre department at the Confederation Centre.

“We’ll also have a regional artist in each location, so we’ve hired 13 various artists, musicians, standup comics, storytellers, dancers. For the Montreal workshop, it’s Twin Flames (featuring Inuit/Mohawk musician Jaaji Okpik). They will create a piece of music out of the Montreal workshop that Marie-Frances will right into the show.”

“To me it is so important that First Nations people have a voice and a presence in this project, about the dreams of youth for the future,” said Diabo.

“Our people have been pushed aside or told we were ‘wrong’ for generations and this is an opportunity for us to speak and be listened to. Especially this year in Canada.”

Twenty-six young people between the ages of 16 and 24 years old will be hired for the performance. The Montreal auditions take place on February 17 at the National Theatre School, while the dreamcatcher workshop takes place the following day.

“We may be able to arrange for auditions in town if there are a lot of people interested. I encourage anyone who is the least bit interested to try. It would be great to have more people from town involved,” said Diabo.