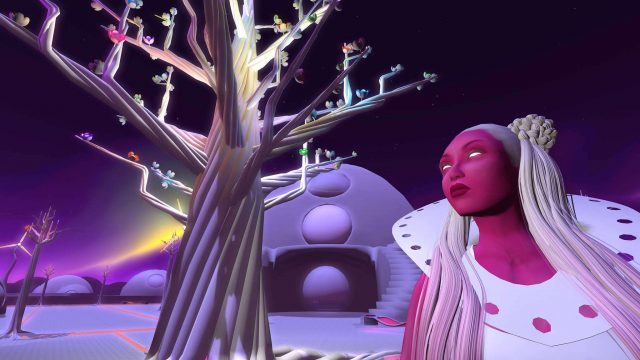 “Becoming Skywoman” is one of the handful of machinimagraphs, or production stills, that will be on display as a part of Tomorrow People. (Courtesy Skawennati Fragnito)

Kanien’kehá:ka artist Skawennati Fragnito’s new work is front and centre at a solo exhibition that kicks off a year of Indigenous programming at a Montreal artistic centre.

The exhibition titled Tomorrow People opens on February 4 at Oboro and brings together over seven new works of art that investigate notions of time and self.

“I’m very excited and a little bit nervous about it – I’m nervous because my work is not finished yet,” she told The Eastern Door.

Through multiple representations of avatars, most notably her own online persona that she has maintained for over a decade in the virtual world of Second Life, Fragnito engages various mechanisms of play, interweaving Kanien’kehá:ka stories and traditional objects with new technologies and artistic processes.

“I wanted to talk about Native culture and there’s always that question, I think, underneath. It comes up again and again about authenticity, it comes up in many different ways, but especially online,” said Fragnito.

“I think people are wondering who is that person, first of all? Is that avatar that looks like a female, is it really a female operating the avatar? And, if they look like an Indian, are they really Native?”

The sculpture Generations of Play consists of three figures, including an industry-made Barbie, a 3D print of the artists’ avatar, and a handmade cornhusk doll made by Fragnito’s cousin Kathleen Dearhouse.

“I’ve kind of been a little bit disillusioned with digital art, mainly because of the hyper consumerist aspect of it, the planned obsolescence, the fact that that you can never really be a master of the medium – it keeps changing on you,” said Fragnito.

“You have to keep re-learning and learning is wonderful, but it comes to a point where not knowing the material well enough hinders the message. I wanted to go back to a medium that I know quite well, and that’s sewing, although today I’m at the end of my rope.”

Among the new works are two newly-made machinimas, or a type of animated film that is produced in a virtual space such as a video game.

The 20-minute “She Falls For Ages” is a sci-fi feminist retelling of the creation story. Narrated by Kanesatake’s Hilda Nicholas, the machinima also features voices from several Kahnawa’kehró:non, including Roxann Whitebean and Owisokon Lahache.

“I’m depicting Skywoman and her family actually living on another planet and they are humanoid, but alien, and the people are all different colours – pink, orange, and green,” said Fragnito.

“The big thing is that instead of falling by mistake, or being pushed, she chooses to jump. She takes on the responsibility of continuing life in a new place.”

The solo exhibition runs until March 18, and kicks off a year of programming decided to Indigenous artists on exhibition at Oboro, as an official event for Montreal’s 375th anniversary.

“It’s not that I’m celebrating 375 years, but I think it’s okay that they mark 375. There’s still 375 years of relationships. What I want to say at the opening is that you would not have been here 375 years if it wasn’t for the Indigenous people that showed you what to do when you got here and helped you live in this environment,” said Fragnito.

In addition to next week’s exhibition, Fragnito will also have her TimeTraveller™ machinima series playing at the Carnegie Mellon University in Pittsburgh from Saturday until the end of February. Then it will be showing in Calgary and New Zealand in March.

“I’m so thankful and thrilled. That piece took up a long part of my life, about eight years and the fact that people get a lot out of it just thrills me,” said Fragnito.