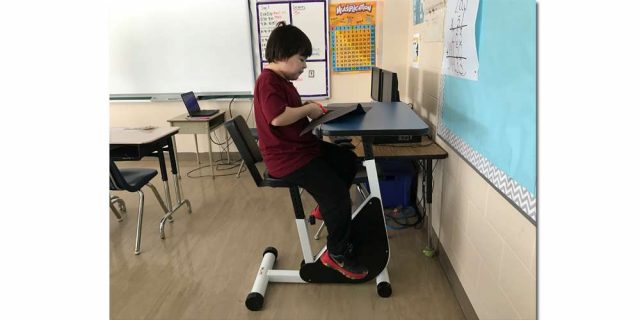 As a way to facilitate kinesthetic learning, Kateri School introduced a number of new workstations in their classrooms to keep students’ bodies moving and minds focused.

In December the school purchased 37 new kinesthetic workstations from KidsFit.

“Whether it be homeroom or our specialists, Kanien’kéha, French, music, library – at least every single classroom has one,” said Lauren Jacco, associate principal at Kateri.

“The purpose is two-fold. On one hand, it’s for everybody within the class to get a brain break or a motor break. They can get some physical exercise while they’re in the class,” said Jacco.

“On the other hand, it’s used for targeted students who benefit more from a hands on learning style – those who need more movement in order to concentrate, focus or just be more productive.”

The response has been positive from students, according to administration and staff.

“All the kids were really excited to try them when we first received them and everybody’s had a turn. Now, what we find is that the kids who really need to be on it are the ones who gravitate toward it,” said Jacco.

“It’s better for certain students than others, so some students will easily produce twice as much as work than just sitting at the regular desk because they don’t get distracted, and so it helps them to not only produce more, but to hand in better quality work because they’re really focused,” she said.

Prophet has three of the new apparatuses in her classroom for students to use. She said she circulates the wobble stool so that every day two new students have an opportunity to use it, while certain students gravitate to the bicycle and standing desks.

“Kids love using the bicycle desk, so they will ask to go there and if they’re not using it properly, then they can get moved, so they really try to focus and do their best so that they get to stay there and are respectful of it as a work station,” she said.

The new workstations were purchased as a result of last year’s increase in special education funding from the federal government.

“We were able to do a bunch of projects that have kind of been sitting on the side and that we had hoped to do in the past,” said Jacco.

Last year, the federal government made a number of commitments to Onkwehón:we education, including outlining $115.5 million annually in the budget for special needs education, an area that the Kahnawake Education Centre had previously been running a deficit in for the past several years.

“It’s long overdue,” said Jacco. “We’re still not on par with outside schools in terms of funding, but at least this government has recognized that we’re able to budget our own money to create our own programs, to carry out our vision and our mission in the way that we see fit. Sometimes you can’t do that when you have a lack of funds and resources.”

In addition to the new kinesthetic desks, the increase in funding allowed Kateri School to begin a project with L’Essence en Mouvement, an occupational therapy company for children using a sensory approach for all developmental disabilities, including Autism PDD, ADHD, and learning disabilities.

The project started on Monday’s ped day, giving a half-day training session to a number of teachers at Kateri School.

“They help with behaviours within the classroom, but they come at it from the perspective of what the root is –what’s the cause of the behaviour?” said Jacco. “They’re going to be working here three days a week, to occupational therapists and giving services to students who either need a full evaluation, or support, to classroom teachers in general.”