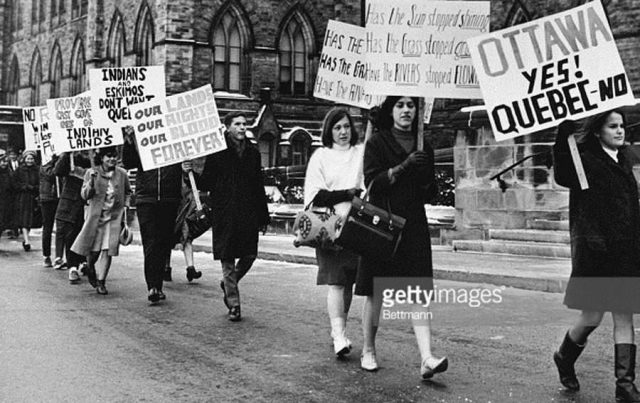 A young Dale Dione, Margaret Horn and Cindy Horn were among the Kahnawa’kehró:non who protested on Parliament Hill in November 1964. (Courtesy Bettman collection, Getty Images)

Margaret Horn was 18 years old when she decided to hop on a bus with her sister and cousins to protest in Ottawa.

“We were all nicely dressed, but it was cold. I remember I had a coat on with fur or something, but I remember it being cold,” said Horn.

The photo, taken on November 24, 1964, is now a part of Getty Images’ Bettman collection.

Horn is standing second from the right, her sister Cindy is behind her in the white shirt and her cousin Dale was in front her yielding the sign written with ‘Ottawa yes, Quebec no.’

Behind Cindy, the late Clifford Peter Diabo is pictured.

“I had my years of protesting,” laughed Horn.

During the mid 60s, she was involved in protests outside of grocery stores to support the Delano grape strike, a labor strike by the Agricultural Workers Organizing Committee and the United Farm Workers against grape growers in California.

“They’d have these protests and you’d go around to some of the stores like Provigo and it was to support the farm workers, and I used to bring my daughter with me. She was like four or five years old. ‘Oh mom. What are you doing?’ I kind of had her very young doing a little bit of activism,” said Horn.

During that day on Parliament Hill, the group was protesting a proposal that Kahnawake’s education be transferred from federal to Quebec jurisdiction.

“Caughnawaga Mohawks believe the Quebec government is seeking complete jurisdiction over Indian Affairs in secret conference with Ottawa, as Mrs. John Curotte, wife of the group’s leader, said today,” the caption for the photo read.

The group held meetings in an old dancehall that was located near Kane’s Corner.

“I remember I was a young kid and I would go,” said Dione. “When that was going on, I was maybe a teenager, 14 or 15 years old, and this was part of one of the actions that were taken at that time.”

Dione doesn’t remember too much about that day on Parliament Hill.

“It was my first act of activism,” she said. “In those days, that was the beginning of political awareness in the community. I was young, so I really didn’t know exactly the details, but my family – my mother – was very active at that time as well. She was very active, so that’s why we were there supporting.”

She said activism is in her family’s DNA.

“That’s how I grew up. In my home, that’s the way it was. I remember growing up I always said ‘that’s all you hear is politics, politics’ in the house with people coming and discussing things,” said Dione.

“My daughters say the same thing when they were growing up. Even as far was my grandparents, they were the last people that were removed for the seaway.”