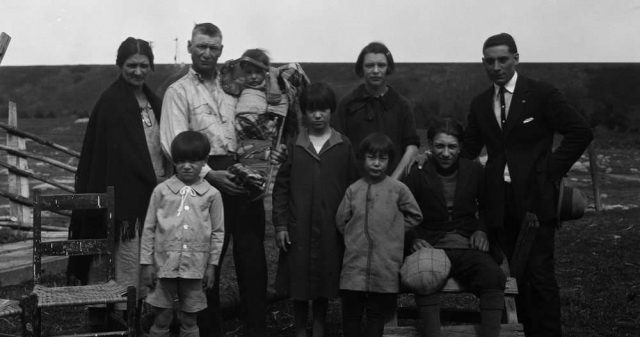 Among the thousands of photos of Indigenous people in Library and Archives Canada, (LAC) very few are named.

Rather, they’re labeled just with words like “Indian,” “half-breed,” or “Eskimo.” But, Project Naming is helping change that.

“The importance is adding names to faces. That these people that are depicted in these pictures were individuals, they played a part in their families, their communities, they had friends and relatives and were a part of a community, and to be anonymous and just to be called “Native” or “Indian” is just not right. So, really, it’s about correcting past wrongs,” said Beth Greenhorn, the manager of Project Naming.

The project, which was launched in 2002, began with a teacher who brought his Inuit students in Ottawa to the archives to find pictures of their own relatives to take home to show family.

For over a decade the project focused on bringing photos to remote Inuit communities in Nunavut, but has recently expanded to include First Nations and Metis with the launch of a Facebook page.

“That’s the power of social media, it really is empowering for people to be able to do their own research in that way or don’t have the time or financial means to visit these archival collections that are extensive to get to them. When they are digitized and you can make them available online, it’s really democratizing,” said Greenhorn.

Kahnawa’kehró:non wanting to search the database can do so by visiting their website.

“We have millions of photographs in the collection and only about two percent are being digitized and are available online, but it’s still about a few hundred thousand that people can still search through,” she said.

The digitalized archives include a handful of photos that were taken in Kahnawake of community members.

“It’s a part of the Canadian National Railway collection and I found some pictures, who I believe are Mohawks, people living in Kahnawake,” said Greenhorn. “They were taken around 1930.”

She said often, the easiest way to find photos in the database is by searching using historical names as keywords.

“Just using different historical terminology, that by today’s standards are racist and aren’t used, but we still have to go through the database and look,” she said.

If someone does recognize a family or community member in the database, Greenhorn said there’s a number of ways to get in touch with LAC so they can update the photo description.

“One is through the Project Naming site on Library and Archive’s Canada’s main website. There’s a naming continues form and this is an online form that has several fields that people can fill out more information,” said Greenhorn.

“They can just email our general inbox. On each photographic record in the database, there’s a “contact us” link to send information that way or you can call us, or if you happen to be on Facebook and see a family member there, put a post on our wall and we monitor that regularly.”