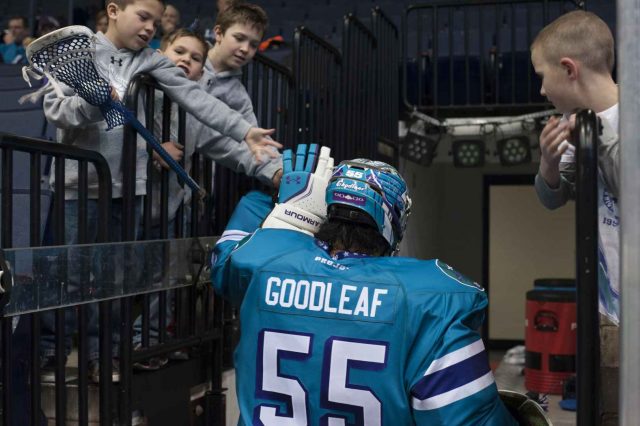 The Rochester Knighthawks of the National Lacrosse League (NLL) know who they owe a huge debt to for their success. Which is why they created Native American Night eight years ago.

“Our owner (Curt Styres) being Native, it’s something he feels passionately about,” said Nate Snyder, the Knighthawks executive vice president of Business Operations.

“The culture and history of the game is important to him and he wanted to get that out to our fans.”

It’s a night that is also very meaningful to players such as Angus Goodleaf of Kahnawake.

“I think it’s real important because we’re the ones who invented the game,” Goodleaf said from his residence in Six Nations. “We have a strong passion for the game.”

The Knighthawks circled this past Saturday night on the calendar because they knew there were several First Nations players on the New England Black Wolves roster.

In all, with Rochester’s eight, there were 12 players on the floor from across Turtle Island.

That meant a great deal to Wayne Van Every, who is in his first year in the NLL.

“There are a lot of Native Americans on the team,” Van Every, who is from Six Nations, said “but now I’m sure they’re going to remember it for years to come.”

Van Every and Goodleaf point to pride every time they suit up.

“There’s a lot of pride. You always play the game with pride,” Van Every said. “To have it (Native American Night) was a little more special being Aboriginal and being in the game. It was a memorable night.”

Goodleaf says there is an unspoken connection between the First Nations players, both on the floor and off.

“A lot of Native guys within the organization and team,” Goodleaf said, “we get a lot of familiar faces and you end up feeling more comfortable. We have a lot of chemistry together and it helps with the other guys as well.”

The Knighthawks won the game 15-8. The team’s first job is to win games. But they also want to grow the game by exposing their fans to its roots. It also helped educate some of those who work for one of the top franchises in the league.

“I played lacrosse growing up in the area,” Snyder said. “I knew a little bit about it. But I didn’t know it quite to the extent that I thought I knew the game.”

For Snyder, it’s a chance to help grow the sport even more in the Rochester area.

“Obviously I knew it was a game created by Native Americans,” Snyder said. “But just learning the spiritual side of it and the meaning behind the game for the Aboriginal people was an eye opener.”

That included a trip to Six Nations last year and a chance to sit down and learn from a true historian of the game.

“I was kind of speechless and sat at full attention,” Snyder said.

It’s what led to the Knighthawks honouring Levi Oakes on Saturday. He is the last surviving WWII Akwesasne Mohawk Code Talker.

For Goodleaf, a night like this reminds him of Kahnawake.

“It brings you back,” Goodleaf said. “It reminds you how the game should be played and what this game is all about. You kind of forget where it came from.”

This story originally appeared in the January 13, 2017 issue of The Eastern Door.