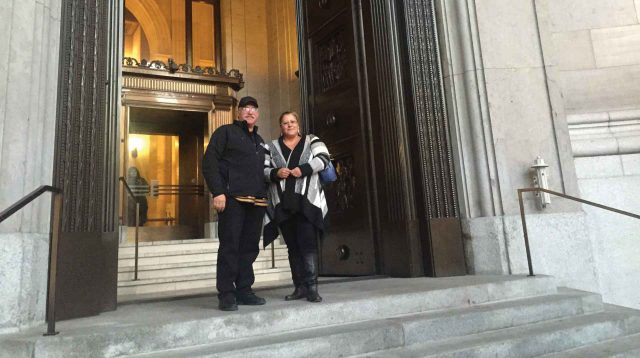 Wallace “Bully” Stacey proprietor of Bully’s Truck Stop stands on the Quebec Court of Appeal steps after hearing his lawyer, Timothy Huot, argue on behalf of himself and 10 other gas retailers. (Daniel J. Rowe, The Eastern Door)

The gas retailers who took Revenue Quebec and Canada to court for unfair tax regulations received a final blow to their case over the holidays.

After the five justices on the Quebec Court of Appeal ruled unanimously against the retailers in April 2016, the Supreme Court of Canada denied their appeal to hear the case on December 22.

“The application for leave to appeal from the judgment of the Court of Appeal of Quebec, dated April 21, 2016, is dismissed with costs,” the decision by judges Rosalie Silberman Abella, Andromache Karakatsanis, and Russell Brown read.

In April, the Court of Appeal ruling said gas retailers must continue to pay assessments issued by Revenue Quebec for non-Native clientele who fuel up on reserve.

Their attorney Timothy Huot of the law firm Spiegel Sohmer, sought to appeal to the Supreme Court of Canada.

“That type of appeal is on leave only – so with permission of the court, then the court denied us permission to appeal,” said Huot. “So, that means for all intents and purposes, that Court of Appeal decision stands.”

The retailers in the lawsuit are less than happy about the dismissal.

“They’re facing enormous tax liabilities because these taxes have been uncollected for over 20 years. It is literally in the millions of dollars. They’ll face these liabilities, and I’m guessing will put them out of business,” said Huot.

He said it’s a frightening future for not only Kahnawake, but for Indigenous communities across the country thanks to the Court of Appeal ruling.

“It is an issue that goes beyond just my clients because it’s going to affect everybody’s business on the reserve – restaurants, golf courses, grocery stores, you name it,” said Huot.

For the gas retailers, that means possible audits by Revenue Quebec to see if they’re charging, collecting and remitting the correct amount of tax.

“If they don’t comply with that request, well then the enforcement measures kick in,” said Huot.

Those measures could include having their business registration number revoked.

“I got a quite a few businesses and everything is going to come to a stop,” feared Derek White, one of the 11 retailers in the lawsuit.

“If we don’t start paying the taxes when it’s delivered, we are going to have our permits/registration numbers pulled, so then we will not be able to get gas, I won’t be able to get groceries at the Market,” said White, who owns OCR Gas Bar, Old Malone Gas Bar, and Country Side.

White said the group of retailers plan on meeting soon to decide what their next steps are going to be, but feels they should be turning to council’s direction.

“(Mohawk Council grand chief) Joe Norton is going to have to do something. They’re going to want us to pay the taxes – it’s either that or the council has to come up with some kind of deal or plan that will help us,” said White.

“It’s really bad because if they could pull permits just like that – once it goes through, it’s going to start with anybody, everywhere. Every business on the reserve that sells to non-Natives will have to charge tax.”

Intergovernmental portfolio chief Rhonda Kirby said council was not aware of the dismissal until The Eastern Door contacted their office for a comment and that it’s too early for council to comment on the issue.

“It hasn’t been discussed yet, and it will certainly be on the agenda for the 9th when everyone is back from vacation,” she said.

“It is an important decision that reiterates the principle of tax fairness and confirms again that Kahnawake retailers have the same obligations as their competitors off reserve,” she had said via email.

“Fuel retailers must collect and remit the consumption taxes. The trader is personally liable to pay the proceeds of taxes collected, but in any case, it is the buyer who pays the taxes, not the seller.”

The reality is more complex on reserve.

Huot argued throughout the initial trial, and the Quebec Court of Appeal date, that the imposition of Quebec tax-collecting programs for non-Native clientele fueling up in Kahnawake would put local retailers out of business.

“In normal day-to-day operations, it’s something that’s difficult to manage. How many people are going to come in and gas their cars with their buddy’s band card? And who is going to get nixed for the tax? It’s the operators,” said Huot.

“I think it is obvious from this situation that the institutions and laws of this country do not favour Indians. It’s that simple. The people who enforce them are not preoccupied by the inconveniences and failures these laws represent for Indians.”