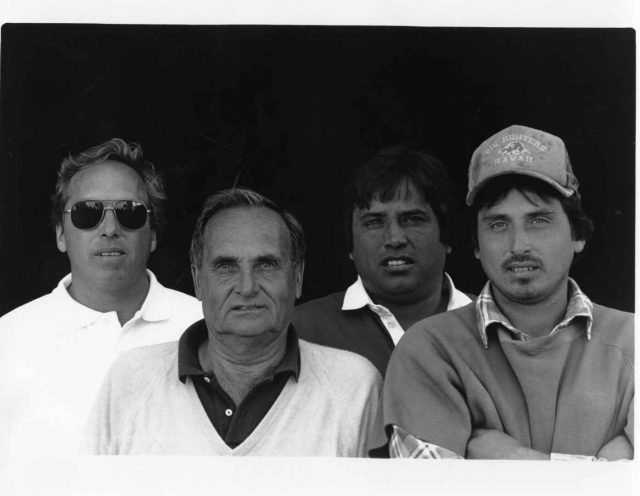 When Angus Patton died last week at the age of 92, he took a little piece of the Caughnawaga Golf Club with him.

After all, he was the founder of the course in 1967. The club is celebrating its 50th year this coming spring.

“It’s going to be different,” his daughter Carrie said. “This morning (Tuesday) I was at the golf course, I was making calls. It’s going to be so weird to go back there this summer without him.”

Angus’ vision  saw the course grow from nine holes to the 27-hole challenge it is today.

It’s a course that is admired by golfers of all levels, from the beginner to the scratch handicapper. Caughnawaga welcomes more than 20,000 golfers every year.

Many of them are from Kahnawake, and have been with the club since its inception. “We have had long-term memberships,” Carrie said. “Golfers who have been good to us and faithful. It’s their home course. People like Clifford McComber, Sny Horne, Mike Deer, George Hemlock and all the Kirbys. There’s just too many to name.”

Without them, Carrie knows that Caughnawaga wouldn’t be what it is today.

“It’s the golfers and all the people that have stayed with us,” she said. “It’s a community. They are the backbone of the place.”

Carrie remembers going to work there in the early days, when the first pro shop was an old chicken coop and the clubhouse was the old farmhouse. Angus built a porch around it. The current clubhouse was built in the early 1970s. The old farmhouse was finally torn down in 2010 after it had already been converted into a home for her late sister Cheryl.

The course may not have hosted any professional championships. But it has played an important role in the Montreal entertainment scene over the years.

“Tons of celebrities have played here,” Jimmy said. “ACDC, Tom Jones, Dennis Quaid, Bobby Orr. The NHL scouts were here one year when the draft was in Montreal. It was a who’s who that day.” Carrie says the Beach Boys and the Backstreet Boys also teed it up at Caughnawaga over the years.

Angus loved the golf club. He played right up until this past summer.

One gentleman who came to Angus’ funeral last week told us the story of how they played a round this summer.

“Dad could only play seven holes before getting tired,” Carrie said. “But he still took $20 off the guy. I guess my father wanted to just take the money off him one last time.”

Angus was known for playing well under pressure.

Carrie says a lot of things have gone on at the course and in the clubhouse over the past half century.

“If these walls could talk,” she said. “There are so many things that went on in this place.”

There have been more charity tournaments and fundraisers to even count, according to the Pattons.

The celebrations for the Golden Anniversary of the Caughnawaga Golf Club are in the works, but Jimmy Patton isn’t quite ready to let the cat out of the bag.