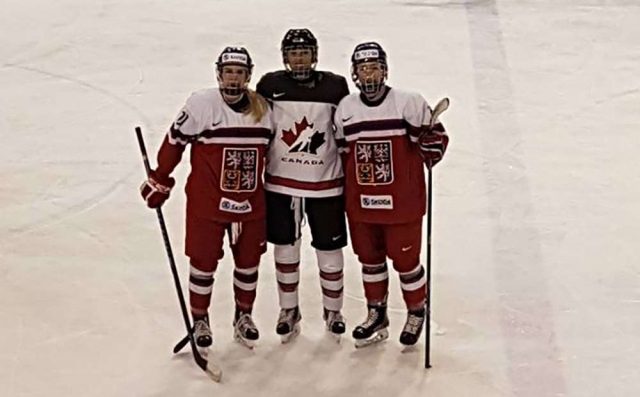 Brooke Stacey and the rest of the Canadian Development hockey team gear up for a rematch against Germany at 1:30 this afternoon. (Courtesy Tina McComber)

Brooke Stacey is enjoying the time of her life in Fussen, Germany with the Canadian Development hockey team, taking part in the Nations Cup tournament against teams from Sweden, the Czech Republic, Finland, Russia, Austria, Switzerland and Germany.

Heady days for a young woman from Kahnawake.

Stacey was selected to the club after a tryout over the summer and a strong start this season, her third, as a member of the University of Maine Black Bears. Stacey is second on the team in goals (7) and points (14).

“This is an amazing experience. I love learning new things about hockey and this is a great place to do so,” Stacey said.

So far so good for Brooke. As The Eastern Door went to press Canada was a perfect 2-0 in the round robin portion of the tournament. They are gearing up for a rematch against the host team from Germany at 1:30 this afternoon (Friday). Germany beat them in a pre-tournament game last weekend.

‘I thought the game overall went really well, we played really well as a team. We came together after the upset loss to Germany, showing what Canada’s hockey is really like,” Stacey said.

Her mother Tina McComber is in Germany supporting her daughter. Tina is posting on social media about all things Brooke with Team Canada.

Playing on the international stage can be intimidating for a young player, but Stacey seems to be keeping it all in perspective.

“It felt pretty good, but I am trying to look at every game as if I was back at school,” Stacey said. “This helps me stay calm and not panic about the game.”

She is able to do that because the routine with Team Canada is somewhat similar to that at Maine. This is also her second stint with Team Canada. She played on the Under-18 team at the World Championships in Budapest, Hungary in 2014.

“The traveling was very long, but I’m kind of used to all the traveling with my team back in Maine so it wasn’t much different besides the long plane ride,” Stacey said.

Stacey’s strength on the ice is her two-way game. She is a very strong player in her own zone, somewhat in the mould of a Guy Carbonneau as a defensive forward who can also score.

So far in Germany she has been kept off the scoresheet, but is playing a key role for Canada.

“It motivates me to continue working everyday to get better. I can’t think too far ahead, just have to go day-by-day and get better each one,” Stacey said.

Playing with and against the best is helping Brooke improve on a daily basis. And that is helping to keep her pointed in the right direction for her future in the game.

“I don’t think this changed my future plans with hockey,” Stacey said. “I have a pretty set plan for what I want to do after college so this event doesn’t change it too much.”

The semi-final is scheduled for Saturday and the final on Sunday. Regardless of the outcome Stacey will bring this experience back with her to the University of Maine squad next week.