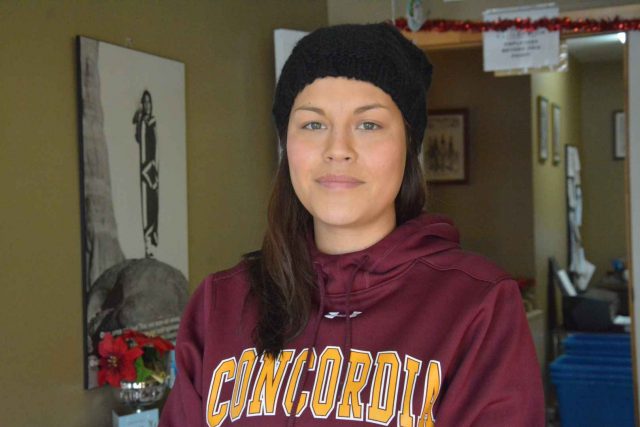 Taylor Goodleaf is one of a handful of Kahnawa’kehró:non to study in the department of applied and human sciences at Concordia University. (Jessica Deer, The Eastern Door)

Taylor Goodleaf hopes to one day use her university education to help people in the community.

The 24-year-old recently finished her final semester at Concordia University and is scheduled to receive her diploma, a Bachelor of Arts in Human Relations, in June.

“In this field specifically, you really have to do a lot of self-reflection. It’s like 75-80 percent of the program is self-reflection, taking a good look at yourself and making sure you want to help people for the right reasons,” said Goodleaf.

“If you’re in this field, you’re definitely not in it for money. You have to make sure that you’re mentally and spiritually ready to try to help people because you’ll be dealing with some serious stuff.”

Prior to her university studies, Goodleaf graduated from the Youth and Adult Correctional Intervention program at John Abbott College in 2012. She took six months off before settling on a program at Concordia.

“I wasn’t sure I wanted to do yet, then I kind of stumbled upon that program by accident. I was just surfing the web and saw students who had taken Youth and Adult Correction Intervention were pretty much a shoe-in for this program. It was like the next step and I went with what I was already studying,” said Goodleaf.

Concordia’s Human Relations program, which is offered by the department of Applied Human Sciences, aims at giving people the tools to become a next-generational leader on a path towards helping professions.

“It’s like a mix of social work and counseling. There’s a lot of psychology in there too, so I was attracted to it because it is a mix of all the things that I was interested in,” said Goodleaf.

Although the Montreal university boasts a large Indigenous student population, Goodleaf was one of the few Onkwehón:we in the department.

Now that she’s completed her degree requirements, Goodleaf is waiting on acceptance into a Masters in social work at the University of Toronto that specializes in Indigenous trauma and resilience.

“I’m waiting for that letter – hopefully I get in. If not, there’s a Masters in Counseling Psychology at McGill and graduate diploma in youth work at Concordia that I was interested in. Those are my options right now,” she said.

Although she said she’s always been a motivated student, the hardest part of undergraduate education was “dealing with life when it hits you.”

“That’s the most challenging part and just trying to keep up with money and your independence. It’s hard to balance it all.”

During her studies, Goodleaf also designed, implemented and facilitated a 16 hour workshop at Kateri school with the help of her class partner Jessica Milardo.

“The workshop was called The Girls’ Corner Youth Wellness Group and was based on the concept of holistic health and wellbeing for 10-12 year old girls. Some topics that were covered were physical health and activities, self-esteem, healthy cooking, bullying prevention, online safety and developing strong, nurturing relationships with each other,” said Goodleaf. “The main objective of the workshop was to create a safe space where young girls could come to learn from each other, and empower each other in a way that would contribute to their overall wellbeing.”

“I’m basically like a youth mentor, like a big sister for kids who are in care or their family needs support. That’s been a really good experience so far,” said Goodleaf. “I got into volunteering because of Concordia. I wasn’t required to do any, but I wanted to because of the type of people that I was surrounded by. All my professors were really inspiring – most of them were social workers, some of them homeless before they earned all their degrees. They were such cool people that genuinely wanted to help people.”

Whether at Batshaw, or in the classroom, she said she is happy to see more Indigenous concepts incorporated into counseling and therapy practices.

“I know Batshaw, for example, uses the healing circle, the circle of courage, and medicine wheel because they know they’re serving a lot of Indigenous people. It’s really based on the teacher, but most of teachers are really well informed on Indigenous issues and make it a point to bring it up in classes, so I really appreciate that,” she said.

Even when they didn’t creep into course material, she said a lot of her assignments ended up being centred around Indigenous-issues.

“A lot of it is based on your experiences in your life when you needed help or when people helped you. A lot of those issues are personal, and it stems down to your identity. It does play a huge part in the things I’ve studied and written about. I’ve always found a way to bring it back to how to help our people, how to help the community,” said Goodleaf.