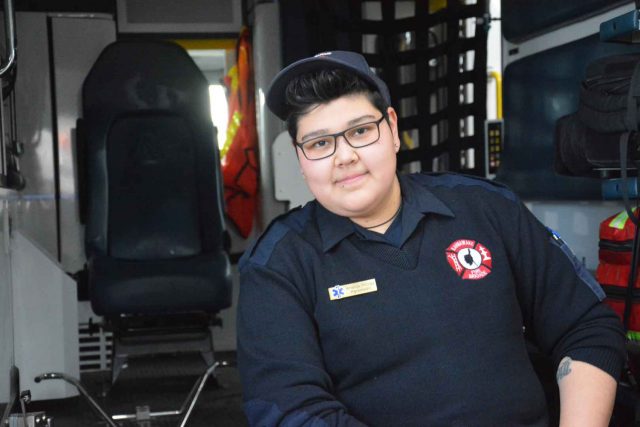 With the growing concerns of overdoses associated with recreational use of fentanyl, local paramedics in the community are now trained to administer a potential life-saving antidote.

As of the end of November, all 15 of the Kahnawake Fire Brigade’s (KFB) paramedics are trained to dispense Naloxone via intranasal spray if they encounter an unresponsive patient with a low heart rate.

“It’s for any kind of opioid overdose. If we find a patient that is unresponsive and barely breathing, then we administer it,” said Amanda-Lee Phillips the KFB’s paramedic, quality assurance and medical instructor.

Phillips received the training earlier this year in June as a part of a province-wide program, and has since trained the rest of the emergency medical technicians who work or volunteer with Kahnawake’s ambulance service.

“It’s a part of the regular advancing of our protocols. They originally started training paramedics in 2014, and now, finally, everyone is starting to get trained,” said Phillips.

“It’s required. We didn’t go out and say we need this. Every year, there’s new protocols that we have to learn and sometimes there’s new medications and this is the one.”

Fentanyl is a potent, synthetic opioid pain medication with a rapid onset and short duration of action. It is estimated to be between 50 and 100 times more potent than morphine.

As a recreational drug, its use has led to thousands of overdose deaths since 2000. Death from fentanyl overdose was declared a public health crisis in Canada in September of last year, and continued to be a major killer drug.

Naloxone, which is also known under the brand name Narcan, can also be administered for other overdoses associated with opioids such as: morphine, codeine, oxycodone, dilaudid, percocet, vicodin and demerol.

“There’s receptors all over your body and when you take fentanyl or another opioid, it binds to the receptor. They decrease your respiratory drive. It basically slows your whole body down while creating a euphoric effect,” said Phillips.

However, according to the KFB’s protocols, they’re not allowed to give a patient Naloxone if it’s confirmed they’ve taken a stimulant, or uppers, such as cocaine, crack, or meth, with the opioid.

“Because after that it will increase the effects of the stimulant and cause seizures,” said Phillips. “If we go there and we ask someone around, we’ll ask if they took coke, ecstasy, or speed today with anything else.”

It’s a growing concern, as many drugs are now being laced with fentanyl, often unknowingly to the user.

Even though it’s not considered a crisis in Quebec, Montreal’s public health agency put in place a number of measures to prepare for such an event, following a brief wave of 79 overdoses in 2014, which caused the deaths of 28 people.

The issue is not falling by the wayside in Kahnawake, either. According to the Kahnawake Peacekeepers and Kahnawake Shakotiia’takehnhas Community Services (KSCS), fentanyl drug use is on the rise in the community.

Phillips said paramedics at the KFB have yet to have to administer the medication to any patients.

“It’s kind of one of those things that you’re glad you have the tool in case overdoses become an issue in the community, but just hope that you’ll never have to use it,” said Phillips.

Signs of an overdose:

One or more of these:
• Breathing very slowly or not at all
• Cold, clammy skin
• Lips and nails turning blue
• Chocking or throwing up
• Pupils are small
• Seizure
• You hear gurgling sounds or snoring
• Person passes out and you can’t wake them up

Tips to prevent an overdose:

1. Know the risk of mixing drugs. You are more likely to OD if you use more than one downer at a time or mix downers with alcohol.

2. Don’t use when alone! That way, if there’s a problem, you can help each other out.

3. If you continue to use opioids, use small amounts if you haven’t used in awhile. Many people OD when starting back again, because their tolerance is low.

4. Know your source and ask around. Make sure you know what you’re getting and how strong it is.

5. Be careful if you have liver problems or Hep-C. It’s harder for your body to get rid of drugs and it’s easier to OD.

6. Avoid speedballing. You can have a delayed overdose. In case of an OD, first responders cannot administer Naloxone.

What to do if someone is overdosing

If someone is overdosing, they need help. Without it, they might die.

1. Roll them into the recovery position if they are passed out and keep their airway clear.
2. Breathe for them, if they aren’t breathing/give CPR:
• Make sure there is nothing in their mouth.
• Tilt their head back
• Give them a breath every five seconds.
3. Stay with them until help comes. If you can’t stay, write down what drugs the person took so that the information is passed on to emergency personnel.

What NOT to do if somebody is overdosing: