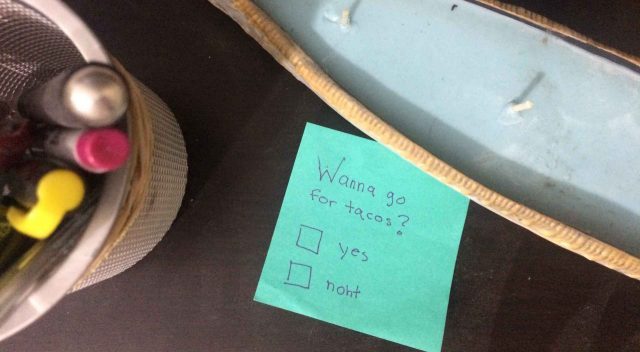 Introduced in the 1997 Seinfeld episode “The Strike,” Festivus is the perfect secular theme for an all-inclusive December gathering.

I may have only been seven years old when the episode originally aired, but like all 90s kids, I was forced to watch Seinfeld with my parents. Honestly, watching that show was torture at the time, but has since grown to be one of my favourite sitcoms, and well, this year, I’m embracing the longstanding tradition of Frank Costanza in true consumer resistance.

As shown in Seinfeld, Festivus includes a dinner, an unadorned aluminum pole, practices such as “airing of grievances” and “feats of strength.”

Ok – maybe I don’t have an aluminum pole, but I’m down for letting everyone know all the ways they have disappointed me over the past year.

So, alas, “I got a lotta problems with you people, and now you’re going to hear about it.”

Here are my grievances about dating:

Being a 26-year-old Kahnawa’kehró:non in the age of Tinder swiping, hook ups and non-monogamous relations that are so common among urban millennials is more complex than anyone sitting at a Community Decision-Making Process hearing for the Kahnawake Membership Law may think.

Dating dudes from town, or even other Onkwehón:we, just isn’t always realistic.

When you eliminate guys that you’re related to, have dated your family or friends, guys you’re not attracted to or that fall outside of your age preferences and lifestyle choices… the pool is small. Like, really small.

I remember the first time I came across another Indigenous person on Tinder, that wasn’t my cousin. It was like I hit the jackpot.

Turns out, he wasn’t all that great. Well, that dream was short-lived.

Yet, still, my identity and the politics of my beloved community always creepy into my dating life, even when I’d prefer that it didn’t.

I don’t want a husband, or even a boyfriend to bring to my Tota’s for that matter, but what’s the harm is going out for tacos and dancing with strangers from the Internet?

Earlier this month, I joked about accepting applications for dates to this year’s Eastern Door’s staff Christmas party.

I decided to add it my bio on all my dating apps, perhaps make a story about how awkward bringing a stranger to a staff Christmas party can be. The response was… interesting, to say the least.

“If a good night out is what your (sic) looking for. I’d be happy to oblige. I love Christmas parties and I’m sure we could have a fun time, especially at the end. ;)” wrote Jonathan, a creepy 27-year-old from Repentigny.

“How good is the caterer usually at your office Christmas party,” asked another.

Then there was the x-rated stuff, that well, let’s just say… was anything far from convincing.

Even the guys that passed my vetting process and consented to possibly being written about, passed on the free meal and booze when it came down to actually having to travel to the south shore – the equivalent of having teeth pulled in the dating realm.

Even a mention of Kahnawake or being Kanien’kehá:ka can open a can of worms. I’d be rolling in the dough if I was paid every time a guy didn’t know what or where Kahnawake was, or didn’t believe I’m Indigenous.

My conversation with Daniel, a 28-year-old administrative assistant that’s described himself on Bumble as “If you like stargazing, then we will get along just fine,” is a prime example.

The bio was probably the first red flag, but this guy was pretty cute.

“So, you’re from Kahnawake??” he wrote. “I’m sure you get this all the time, but are you part Native American?”

Sigh. Yes… yes, I get that all the time. Thank you stranger on the Internet, I wasn’t aware that I have blonde hair, blue eyes and the skin complexion on par with Casper the friendly ghost.

When I told this guy that I’m not “part” Native American, that I’m Kanien’kehá:ka, his response was. “Ah, fully? With blue eyes? Haha. I didn’t know that was possible.”

HAHAHA. Yes, so funny. NEXT.

I just wanted to grab a beer with someone who’s cute, not have to explain identity politics – gosh.

Another guy, Sam, has been trying to guess “the origins of my name” for three days. There’s been guesses of Italian, Quebecois, Russian, Ukrainian, Brazilian, and even Middle Eastern so far.

I know once I finally tell him, the conversation is going to turn into something similar of the one I had with Daniel. It always does, so, as per usual, this “single lady” will be spending the holidays solo… again.