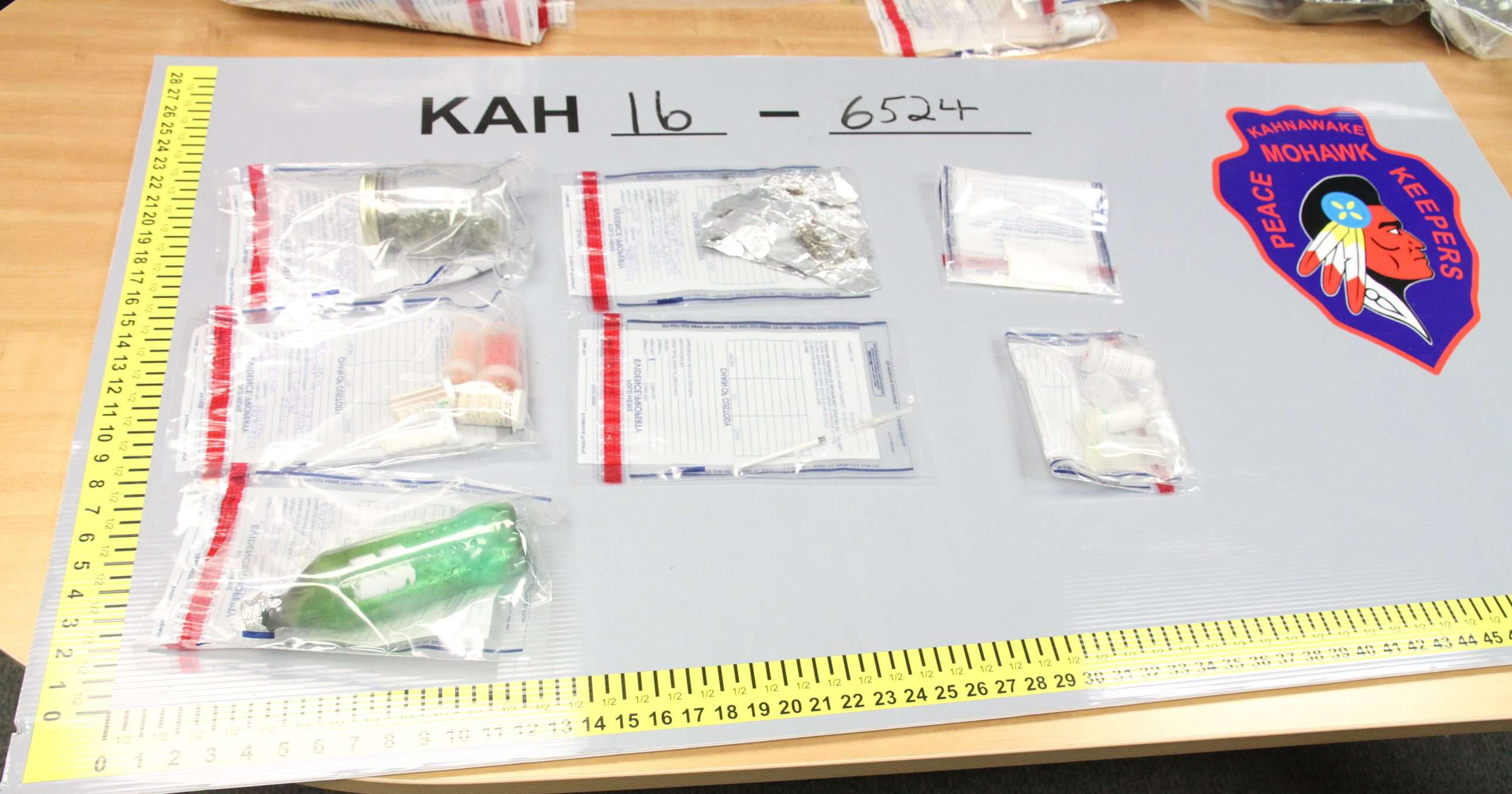 The seizure of suspected fentanyl last week has PK chief Dwayne Zacharie urging community members to educate themselves on the reality of powerful opioid painkillers and their effects. (Courtesy Kahnawake Peacekeepers)

Peacekeeper chief Dwayne Zacharie was clear when speaking about the reality of fentanyl use in Kahnawake.

“Obviously it’s here,” he said. “The Peacekeepers just dealt with it.”

Zacharie was referring to a PK raid last Friday involving two residences and a vehicle in Kahnawake that resulted in seizures of suspected fentanyl, other drugs and firearms, and the arrest of a local male.

According to the PK report, investigators received a tip about a suspected fentanyl and dilaudid dealer in October and investigators began conducting surveillance, and obtained warrants to raid two residences and his vehicle.

Last Friday at 13:19, investigators Larry Beaton and Jimmy Jacco, along with three patrolmen, executed the warrants on the two houses on the Old Chateauguay Road near the old Studio USA, as well as a Cadillac Deville.

Osler Ray Foote was remanded to Riviere des Prairies detention centre, and charged Monday with two counts of trafficking, one count of possessing firearms, and one count of improper storage of firearms.

The majority of the drugs were seized at his primary residence, which was in a “deplorable state” when officers arrived with syringes and other drug paraphernalia strewn about the premises.

The investigation and arrest proved what Zacharie, the PKs, and Kahnawake Shakotiia’takehnhas Community Services have known to be true: Fentanyl drug use is on the rise in Kahnawake.

The Eastern Door has reported since January about the rise in prescription painkiller use and abuse, highlighting fentanyl as a particularly dangerous and prevalent choice for drug users.

Fentanyl and other synthetic substitutes of the drug are incredibly powerful, addictive and dangerous.

Zacharie said education is paramount in order to curb the use of these drugs before it becomes an even greater issue.

“I think people aren’t understanding what it is and what it can do to them,” he said. “They’re not realizing. Based on our file that’s exactly what I believe. People just don’t know what it is. They’re trying this thing and it could have fatal consequences,” he said.

“Look at what’s happening everywhere else across the country. We can’t think that we’re immune to it.”

The British Columbia government has called for the drug’s rampant use to be treated as an epidemic in the province. BC recorded 128 fatal overdoses in November to bring the province’s total to 755 on the year. Fentanyl has been detected in 60 percent of the cases, according to a report released by the BC Coroners Service.

The Vancouver Police Department now equips offices with Naloxone nasal sprays, which block or reverse the effects of opioids such as fentanyl because officers have come into contact with or exposure to the drugs, and the force reported some exhibiting overdose-like symptoms.

“They have it because they’re also worried about cross contamination of their officers from handling it, and handing the people sometimes,” said Zacharie.

Paramedics in Winnipeg saved a baby in critical condition in October after the nine-month old touched suspected fentanyl powder. The boy’s parents were charged.

Zacharie feels Kahnawake would be wise to heed the lessons out west.

“Look out there at all the media about fentanyl and what it can do to you,” he said. “I’m not trying to single anybody out, but we have to develop an education process on this because people just don’t know what it’s doing to them. They just think it’s this great drug, and it’s not.”

“We have files where people are victims of Fentanyl, overdoses, that type of thing,” said Zacharie, who has met with the Mohawk Council of Kahnawake chief and council, and said some were not as aware of the drug as other illicit substances.

“People are pretty shocked,” he said. “People still think, in terms of drugs, they’re thinking marijuana or cocaine, and they think that their dear ones aren’t doing those things, and you know what, the statistics say they probably are.”

His advice is simple.

“You need to have honest and frank discussions with your children,” said Zacharie. “It’s really difficult to keep them away from it and shelter them and to think that they’re not doing it. You have to talk to them about the consequences, about the effects, about the aftermath, and about what could really happen.”

As reported in The Eastern Door (vol. 25 no. 47), community services has begun an awareness campaign on opioid addiction, and is urging those using the medication to be very careful with their prescriptions.

KSCS staff advises anyone prescribed a highly potent painkiller to remain in constant communication with their doctors, while using, and for those with prescriptions to keep a vigilant eye on the drugs’ storage.

How does the drug work?

According to the National Institute on Drug Abuse, fentanyl binds the body’s opioid receptors in the brain that control pain and emotions. This causes a rise in dopamine levels, producing a state of euphoria and relaxation. The drug’s effects resemble those of heroin.

“There’s an extreme risk of addiction and dependence on this,” said Zacharie. “Basically, if you take too much, you go into a coma and die. It shuts down your system.”

Girls get chance for empowerment and to rock!