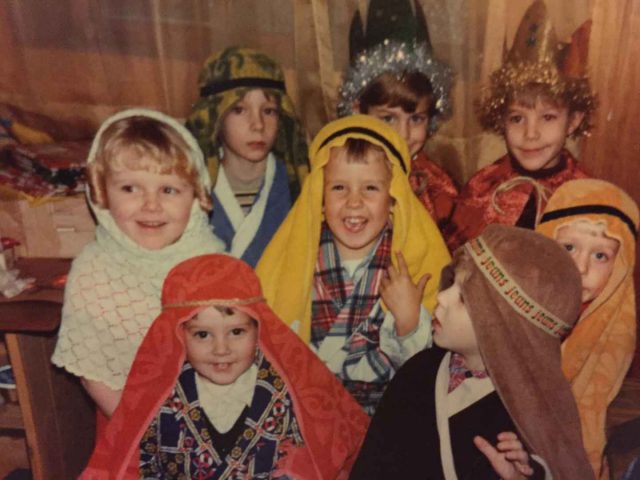 Front and centre, myself as Joseph and my younger brother, bottom left as a shepherd. My mom “didn’t recognize the housecoat.” (Courtesy Kathleen Rowe)

Once the awkward church “Halloween” party was over at Kelowna Bible Chapel growing up, it was time to set our sights on one thing: Christmas.

The holiday was, along with Easter, the highlight event at the church, and there was a hallmark tradition every year, as important as the mandarin orange at the toe of the stocking: the nativity play.

The characters from the story of Jesus’ birth, as told by the gospels for those who don’t know, include the mainstays: Joseph, Mary, the shepherds, three wise men, and baby Jesus (usually a doll).

Angels, a star, King Herod and some animals also make appearances, depending on the production or availability of kids.

A friend of mine Amanda once nabbed the “star” role responsible for leading the wise men to Bethlehem. Star was perhaps the biggest misnamed part of the play that year. Amanda said she felt “underdressed.”

“I felt disappointed because there were no lines for the star,” she added.

Amanda, it seems, was destined for supporting roles. She remembered a particularly unappealing role she once nabbed.

“Once I was a sheep. Or was it a goat?” she said. “I think it was a donkey, and that part was the absolute worst because it was a shared role, either the head or the butt.”

My older brother Aaron was not one begging for lines like his diva younger brother. He remembers a double-bonus booking at the same time: a lead character, but also one where little was asked of him.

“Think I did the Joseph role once,” he said. “Just had to stand in the background. No talking.”

I distinctly remember playing Joseph on more than one occasion and always thought my friend Kim nabbed Mary due to lack of females my age. She remembers things differently.

“I feel like I was always a background angel or a donkey,” she said. “I honestly thought I never got the Mary part except that one time when we did some modern spoof on it.”

I have vague memories of this modern fusion production because Kim’s cousin Joel played Joseph and I played an adult Jesus for some reason.

“You were always Joseph because Joel probably wasn’t interested, and also because everyone saw you as the aspiring actor,” said Kim.

Ouf. If they could see me now…

Another brother of mine, Stephen, said he played a shepherd once, and I’m pretty sure I caught him in a wise man role once or twice.

Ah the housecoat, a classic wardrobe choice for people living in the Judean province of the Roman Empire, as told by the nativity play. Scholars suggest the birth of Jesus at between 6 and 4 BC.

“O Little Town of Bethlehem,” “We Three Kings,” “Silent Night,” “Hark the Herald Angels Sing,” were pretty much guaranteed to be part of the show, and, of course, “Joy to the World,” was always the kicker.

The crowd got to join in on that one.

There was one motivation that I remember making it all worthwhile in the end, and my brother reminded me of it.

Ho baby. The brown paper goody bag. Worth all the star and shepherd roles in the world.