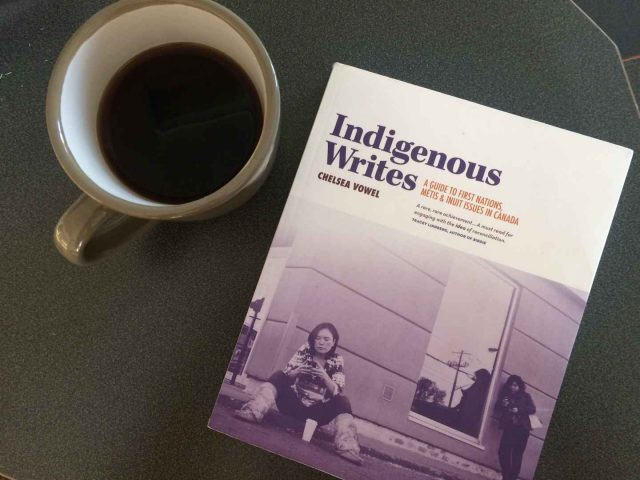 The list could very well go on of the topics discussed in the 31 chapters of Chelsea Vowel’s recently published book Indigenous Writes: a Guide to First Nations, Metis & Inuit Issues in Canada (Highwater Press, $20.80-$26).

Don’t let the rather academic cover or title fool you, this is a very interesting, totally readable and, at times, downright funny look at an array of Indigenous issues in Canada.

The book is broken into five parts: “the Terminology of Relationships,” “Culture and Identity,” “Myth Busting,” “State Violence,” and “Land, Learning, Law and Treaties.”

Throughout the chapters Vowel leads readers to a better understanding of issues such as housing on-reserve, Bill C-31, ptarmigan hunting, cultural appropriation, and readers will be cleansed of various misconceptions to misunderstandings to straight up lies that filter into common talking points across the country.

Misconceptions, it should be added, are not exclusive to mainstream Canada, as some topics are ones this reporter has heard discussed in Kahnawake without a full understanding of it.

Vowel said in an interview on CBC’s Unreserved that the book came about after she found herself wading into the various minefields commonly found in online comments sections from articles on Indigenous issues.

“I found that I was having the same conversations with actually the same people over and over again on different articles, and I was tired or repeating those arguments,” said Vowel.

She started putting arguments together in posts on her blog, apihtawikosisan.com that grew into the pages of her book.

Her style is straightforward, and will help any person (Indigenous or not) make some sense of complex issues.

Take her summery of status as defined by the Indian Act.

“Status Indians can be Indigenous or not, have band membership or not, can live on-reserve or not, and can be treaty Indians or not,” she writes.

“What you should take away from this is to not make assumptions about status, what status entails, and what rights and benefits are associated with status.

“If an Indigenous person is not a status Indian, this does not mean he or she is not legally Aboriginal; in other words, someone without status can still legally be Aboriginal. More important, not having status does not mean someone is not Indigenous.”

The extended quote gives a nice taste of Vowel’s ability to explain something without degrading into wordy academic speak or preachy condescension.

The book is a perfect aid for teachers or professionals working in the Indigenous world, but also for anyone who sees a news story and wants to be simply informed about the background of why that story happened.

“Anybody who sees these stories of misery and wants to move beyond just accepting the misery,” said Vowel. “Let’s look at the bigger picture and try to understand what’s happening.”

Vowel is never preachy in her book.

She, much like Thomas King in his seminal and incredible book The Inconvenient Indian, is conversational and, though she’ll throw a punch if needed, it’s more a punch of redirection than one of contempt.

She does not assume people think a certain way (always obnoxious), but rather responds to what she’s read or heard people say. This is an important distinction for those wanting to create a dialogue of understanding, as exemplified in her discussion on appropriation.

“It’s okay to love our stuff,” she writes. “You can even have a whole lot of it, legitimately and guilt free! There are so many Indigenous-owned online boutiques now, full of gorgeous, high-quality, and unrestricted items. Notice that none of these places is going to sell you eagle feathers or war bonnets.

“Still, there are a lot of knockoffs out there, and regardless of your views on pirated anything, the fact is that guying cheap imitation “Native stuff” hurts our communities and quite often perpetuates stereotypes and cultural confusion.”

Productive and helpful rather than smug and insulting is always better.

Every chapter ends with a large collection of resources that readers can use to further their understanding of a topic.

Her goal, as she said in the CBC interview, is to start readers on a course to a better understanding.

“I give you resources because I want you to do the research, and it’s all there for you, and I really, really encourage people to do the work. You can’t just get deposits of knowledge. That’s not how this works.

“You have to be interested in something enough to put in the work, to understand the topic, to delve into it, to do the research, and then change how you think about things and how you act.”