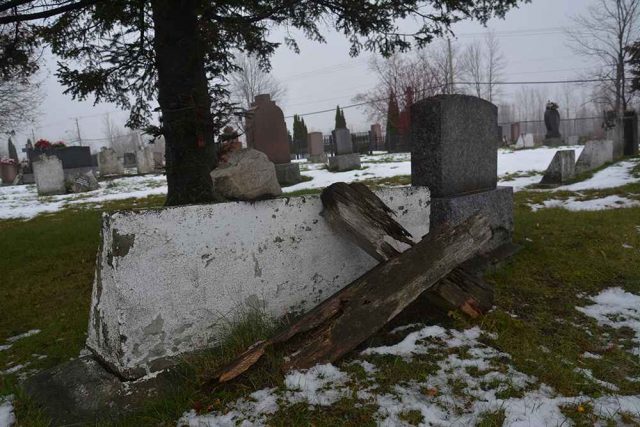 The state of dozens of tombstones and crosses in the Catholic cemetery has some community members concerned. (Jessica Deer, The Eastern Door )

The sight of so many toppled over headstones and deteriorating crosses had community member Phil Jacobs feeling uneasy during his last visit to the Catholic cemetery.

Earlier in the fall, Jacobs was working construction on a nearby road and decided to take a stroll through the cemetery during his lunch break.

“I noticed, gee, how many headstones that are just laying on the ground or are severely tilted,” he told The Eastern Door. “It just looks bad. There’s got to be a way to fix them. To me, it’s just about respect.”

Jacobs said over a hundred headstones and crosses are in that state, both at the Catholic and Protestant cemeteries. Both graveyards are taken care of by volunteers.

Robert Patton has been the caretaker at the protestant cemetery for several decades – it’s a voluntary position that was passed down to him from his father and grandfather.

“We try to fix them back up as best we could,” said Patton about the damaged or deteriorating grave markers.

“In the old section, a lot of them have just rotted away now. Years past, we’d put a stone marker or we just got a piece of cement and wrote their names in there.”

In 1976, he helped organize a special day to do just that.

“We called it Green Up Day. We had families come to the cemetery, we straightened out monuments, cut the grass, we had a collection made and people donated some money – we’d fill holes and all that stuff,” said Patton.

Down the road, the situation is similar with the St. Francis Xavier Mission.

“In the years past – like decades – the members of the Knights of Columbus used to maintain it from the spring to the fall. We have a few, but they are elders now,” said Kelly Robertson, a volunteer at the church.

“The church did, in the past, have a cemetery collection and they would give the men the money for gas, but that hasn’t happened for a while. We’re getting a lot of calls of who’s in charge of it – who needs to maintain this?

“Here at the church, it’s all run by volunteers and the volunteers from years ago are obviously older and can’t do it.”

While they still have a dwindling list of volunteers that cut the grass and pick up garbage during the summer months, Robertson said some members have voiced their concerns about the old gravestones in the past.

“They were looking to make a committee and I don’t think that happened because they wanted to restore some of the tombstones. I really think it has to be a committee that’s put together and it would have to be council that would have to put that together because it’s community land,” said Robertson.

“As far as I know, it’s always been up to families to take care of stuff like that,” said Mohawk Council of Kahnawake lands portfolio chief Clinton Phillips.

“My father and his siblings all chipped in for the renewal headstone of their mother and late sister. Other people I know bought for entire families that have been gone for decades. It’s a personal call. I would never let my great-grandmother’s headstone collapse and just say, oh well, forget about her.”

Jacobs was aware of the longstanding tradition, but expressed concerns for those without any living descendents or families who may not have the means to make repairs.

“For me, it’s all about respect. It bothers me because I see a lot of old names on those stones, especially the last names that aren’t even around town anymore. You see the stone laying on the ground. Well, who’s going to fix that? They have no more family. It’s not right,” he said.

He feels whether it’s the church or council’s responsibility, something needs to be done.

“I don’t think it would be too hard to put together some kind of budget to go in there and repair 20 or 25 a year – something over a period of so many years and get them all repaired eventually. It’s about honouring all the ones that passed before us,” said Jacobs.

According to council’s press attaché Joe Delaronde, the issue, as well as other concerns regarding the final disposition of deceased members of the community, has been on council’s radar.

“Council has met on this and they have mandated a small working group to begin looking at peoples’ understanding and what they would like to see in cemeteries because they’re both full,” said Delaronde.

“They’re going to have to come up with a plan, so it is being addressed. Work is underway to see what needs to be fixed, rectified – anything like that. We’ll need community input because it’s peoples’ relatives, of course.”

Phillips said details on the consultation will be announced in the New Year to address not only concerns such as Jacobs’, but other issues as well.