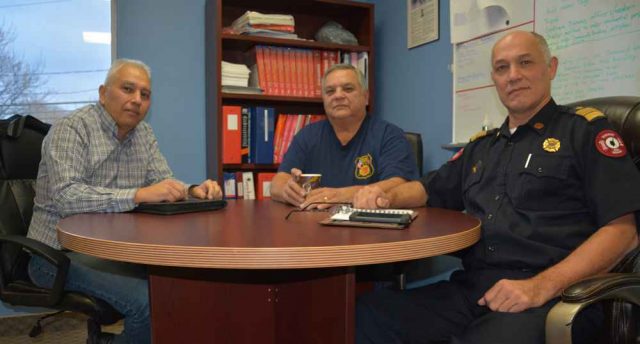 The Eastern Door sat down with fire chief David Scott and KFB board members Lloyd Phillips and Terry Diabo to talk about issues concerning the current and future state of Kahnawake’s ambulance service.  (Jessica Deer, The Eastern Door)

“It’s about being able to have Kahnawake control our own institutions,” said KFB board member Lloyd Phillips.

They’re calling on the Mohawk Council of Kahnawake to create a stand-alone agreement with the province to determine how they could access training and certification.

“We need council to take this issue very strongly to Quebec and make sure that message is loud and clear,” said Phillips.

Since the early 90s, new paramedics at the hall would receive basic EMT training in New York State on a part-time basis during the evening for several months. Upon competition of the training, they’d take extra courses in-house at the KFB to meet Quebec certification requirements.

However, over the course of the last decade, Quebec became stricter on how its paramedics are certified. Since 2014 candidates wanting to enter the field need to successfully complete a three-year college-level program in pre-hospital emergency care.

The closest program, available in English, is at John Abbott College. Twenty-three-year-old Karonhioko’he Doxtater is one of two Kahnawa’kehró:non to complete the program in the past five years.

“It’s intense,” said Doxtater, who graduated in 2014. “It’s a great program. I’ve tried to talk to a lot of people to get into it because I know Kahnawake really does need paramedics and there are people I graduated who work for Kahnawake right now, but if that’s what they want to do, they should definitely go for it.”

Although she’s been working as a medic for nearly two years at ÉvoluSoins, a private company hired for events across Montreal, she’s not certified to work for the government or in Kahnawake.

“It’s only offered in French, unfortunately, which is why I didn’t take it. It’s not that I’m not good, it’s just that my French isn’t good enough to pass the exam,” she said. “I passed the one from the school in order to pass the program. They simulate it, but it’s all in English.”

Although the provincial certification changes came into affect two years ago, Scott said they’re feeling the effects now with only 15 paramedics on staff and as volunteers to service the two ambulances.

Scott said the last cohort trained “the old way” churned out nearly a dozen community members with basic EMT training. However, because the demand is for volunteer positions, some only ended up staying as members for a year or two.

The high turnover rate is why the KFB feels the CEGEP program just doesn’t meet their needs.

“If we’re looking at someone coming here to do a couple of shifts a month or volunteer their time, it is unrealistic to expect anyone to go through that level of training,” said Phillips. “We’re hoping to find solutions so that we could function the way we’ve been functioning for years, meaning, we’ll find the means necessary to train our people to equal standards.”

Of the current 15 members who are paramedics, seven work full time at the station and are often asked to do more by filling in on weekends and overnight.

“If somebody goes off sick or somebody gets hurt, there’s that added burden on the remaining paramedics,” said Scott.

The 26-year-old knows first-hand the realities of the job.

“It doesn’t stop – your life revolves around the place,” she said. “You work your regular 40-hour week, then you’re on call 24 hours on the weekend and you’re in station for another 24 hours. You rarely get a full weekend free. I finish work at 4 p.m., I go home and I’m on call until I come back in the morning.”

The extra shifts are all volunteer to address their short staff. For Amanda-Lee, it can take a toll and cause stress.

“You can get a call in the middle of the night, then I have to go back to work the next morning,” she said. “There’s so much stress. Am I going to get a call? The thing I stress about is because I live eight minutes away. That could be life or death.”

Terry Diabo, a KFB board member, said that’s the nature of the job, and why there’s a need for change to get more community members certified to work in the field

“You’re not dealing with the average go to work and come home. You’re dealing with a lot of drastic stuff – a lot of that takes a toll on our people, not only themselves but their family dynamics,” said Diabo, a board member. “We have that obligation to keep everyone well with debriefing, support. Along with being the medic, the officer, and the firefighter, and training – there’s this responsibility to maintain and keep well.”

The issues at the fire hall are on the radar of intergovernmental portfolio chief Rhonda Kirby. She said they’ve been attempting to establish a formal dialogue with Quebec on ambulance issues, but Quebec has been failing to respond appropriately.

“It’s a slow-moving vehicle that they have in Quebec, so it does take an awfully long time for us to get anywhere on any of our files. It’s coming up to a year that Joe (Norton) and I were in Quebec City and met with (premier Phillippe) Couillard, Geoff Kelley and a lot of promises were made then. It seems like several files were going to be signed off so we left there feeling positive about things, but it will be a year and none of those files have moved anywhere,” said Kirby.

The elder Phillips said if things don’t change soon, the ambulance service will have to bring in more non-locals. He said it’s not their first choice.

“We take pride in the fact that we’re a Kahnawake fire and ambulance service,” he said. “We’re taking care of our own people. We go above and beyond because it’s our friends, family and neighbours, so we want to maintain that. If we’re being limited on how we can access certain training and run our department the way we want to run it, that’s in jeopardy.”