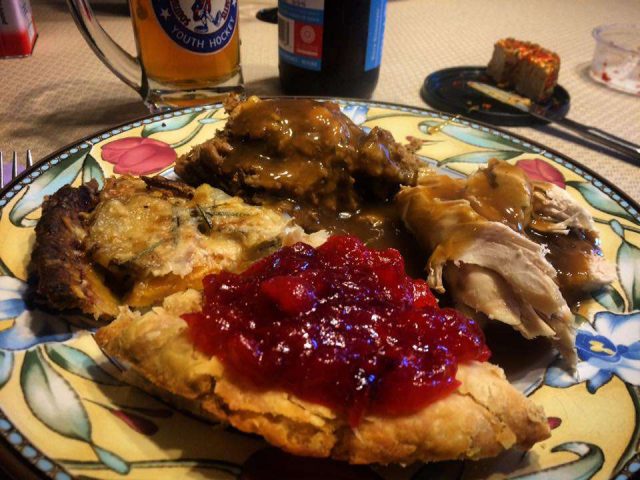 A recent non-scientific poll conducted by The Eastern Door revealed that Kahnawake is more divided than ever this holiday season.

The choice is so controversial, it’s split families, friendships, and in my case, is among the questions asking potential dates right after important things like “who’s your mother” and “who’s your father?”

I set out this week to find what condiment the community prefers to put atop their meat pie.

LeBorgne wasn’t alone. On Twitter, ketchup was the clear winner with 37 percent of respondents, and there was a four-way tie with cranberry sauce, gravy or other as an option.

However, Facebook painted a more complex reality, an overwhelming majority of Kahnawa’kehró:non expressed their preference for both.

“Cranberries when it’s hot and ketchup when it’s cold,” seemed to be the general consensus among those who enjoy both.

Justus Polson-Lahache offered some insight into the popular tradition.

“It all goes down to how your mudder showed you how to eat it. I think every generation acquires that and then changes it just a little bit to their liking and passes it on to their own children. I really can’t explain why, I just grew up eating it that way and it became the way it is,” said Polson-Lahache.

“Ketchup, cold pie. Like next day and the next week or so of eating it cold. Gravy or cranberries on the first night when everything is fresh. If there’s both I’ll put it on the side and dress each bite. One bite with cranberry and one bite with gravy. Or take two slices.”

The staunch cranberry sauce supporters came in a close second.

“First of all, it has to be homemade. Cranberries give meat pie that extra taste of Christmas,” said Sedalia Fazio.

“I remember it was always the first thing my grandmother made before starting to cook our Christmas feast and boy was it a feast! Food for hundreds and she pretty much fed hundreds from Christmas Day to New Year’s Day – it was non-stop people in and out!”

Although in most recent years, Fazio spends Christmas working, she’s always sure to make a batch of homemade cranberry sauce when she has the opportunity to cook.

“Just boil it with sugar, but not too much,” was her best cooking tip.

The pro-ketchup smotherers were trailing not far behind, in third.

“No self-respecting Kahnawa’kehró:non would put anything but ketchup on meat pie,” said Timmy Norton.

“Most people I know and family members prefer cranberries. But, like my t-shirt says, I put it on everything, hamburgers, hot dogs, meat loaf, chicken, steak and cornbread, eggs, homefries, about the only thing I don’t put it on is soups and spaghetti.”

Even outside of these two main staples at the kitchen table during the holidays, others preferred gravy, raspberry jam, strawberry jam, cheese from the butcher, mayonnaise, mustard, butter, salt, or even a condiment-less pie.

Among them, the anti-ketchup squad was most vocal.

“Some people put ketchup on everything. And lots. It doesn’t seem to matter how good the food is, it will all taste like ketchup. Good food doesn’t need ketchup,” said Kenneth Deer.

Deer admitted he does prefer cranberries, “but not too much.”

“Need to taste the meat pie,” he said. “What’s the point of cooking, baking and seasoning a fine meat pie if it’s just going to taste like ketchup?”