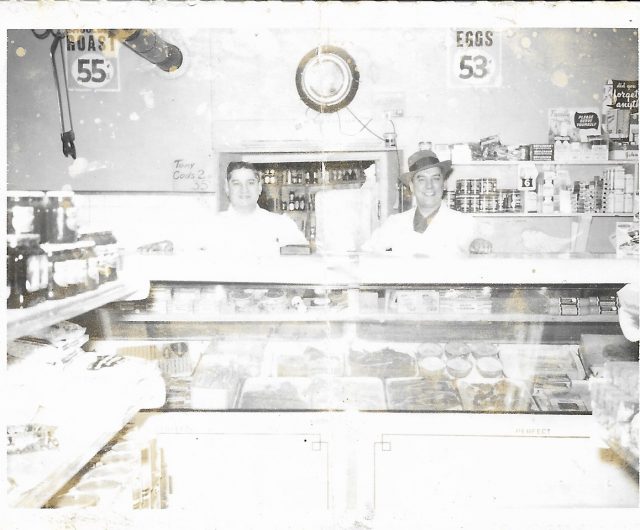 Earl and David Lafleur stand behind a meat counter with prices that would cause a chaotic stampede of customers today in the second incarnation of Lafleur’s Meat Market located on the Old River Road. (Courtesy Kiersten Lafleur-Diabo)

Only those pushing 100 will be able to remember a time in Kahnawake when there was not a person in the community named Lafleur, which customers could see for meat.

The pair of Blast from the Past pics this week feature David Lafleur behind meat counters in two establishments bearing the family’s name.

The colour photo is from the location along Old Malone Highway that opened in 1969 and closed last year after serving the community for the over half a century. David sold T-Bone steaks and tenderloins for five bucks at the time of the picture.

The black-and-white photo features David along with his brother Earl standing behind a counter where eggs were 53 cents, and roasts were 55 cents a pound.

Warning: if you see roasts now for 55 cents/pound, they are either not any animal that you should be eating, or you’ve traveled back in time and you may permanently disrupt the space-time continuum if you mess around at all.

The store in question was the second Lafleur’s market that opened in the early 40s.

“That was our old store,” said Stephen “Skip” Lafleur, who operated the third Lafleur’s Meat Market that recently closed on the Old Malone Highway.

Skip, David’s son, remembers working as a young man at the second store that replaced the first one his grandfather, also Stephen, opened in 1932.

“I have a picture of me, I was a year-and-a-half old standing in the truck when my father went to Adirondack Junction to pick up a meat block that he had bought,” said Skip.

“It was like five feet by five feet, a big long heavy thing. I still had that in my store when I closed. Way back then we were in the store where the courthouse is, and we left there in the spring of ’69.”

1969 was the only year Skip Lafleur did not put on a white apron to get behind the meat counter, when he took a break to teach at the beginning of the year.

“I was teaching that year, and my father said, ‘can you come back and give me a hand,’ so I went in in June, and I never left,” said Skip.

“That was the only time I wasn’t in that business was from January to June. The rest of the time was from 11 years old through till last year.”

Eagle’s Nest Convenience and Deli (see story on page 8) is the fourth iteration of a Lafleur-owned deli with Kiersten Lafleur-Diabo and husband Jay Diabo picking up butcher’s knives, and decking out their new shop with a lot of the accouterments that were at the old shop.

Both pics feature Kiersten’s grandfather wearing a stylish fedora behind the counter that has also stayed in the family.