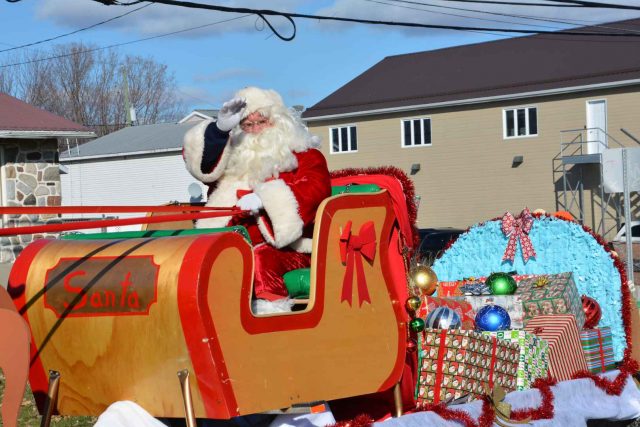 Kids, dogs, and creepy teenagers will all get a chance to bother Santa this afternoon. Don’t worry, he likes it. (Daniel J. Rowe, The Eastern Door)

If there is one thing that remains a universal truth at every Kahnawake Holiday Parade, it’s that there will always be candy canes.

If you want them, come and get ’em!

The parade starts around 11 a.m. Sunday and will, as per normal, travel from east to west up the Old Malone Highway like a non-stop festive Yule log of joy, music, candy and sometimes dogs.

“There will be a K103 grandstand set up announcing the floats as they go by,” said Terry Young of Kahnawake Shakotiia’takehnhas Community Services, an organizer, who added that there will be live music throughout the morning.

At the end of the line, Santa Claus will make an appearance for kids, creepy teenagers and dogs to enjoy. Hot chocolate and treats will also be on hand.

The usual suspects of highlight floats will also be on hand this year (you know, all those aside from this Eastern Door reporter and a steady supply of newspaper-inspired genius).

The Peacekeeper station, Mohawk Council of Kahnawake and KOR Cultural Center never fail to impress regularly, but each of the four years have included surprising and exciting entries from throughout the community.

Young said there were about 15 floats thus far, as well as Irish Dancers from Chateauguay (wait, is Chats considered in Ireland now?).

The Mohawk Council is going with a “Rockin’ Around the Christmas Tree” theme, harking back to the 50s and 60s classic rock n’ roll.

“I’m putting together a playlist of the best rock n’ roll songs from that era and holiday songs performed by groups such as the Ronettes, Brenda Lee and Elvis. It’s going to be a lot of fun dancing up the highway to the hits.”

The PKs are going Charlie Brown Christmas this year, and as PK intel analyst Tara Jacobs said, “ours is so cute. I can’t wait for you to see it.”