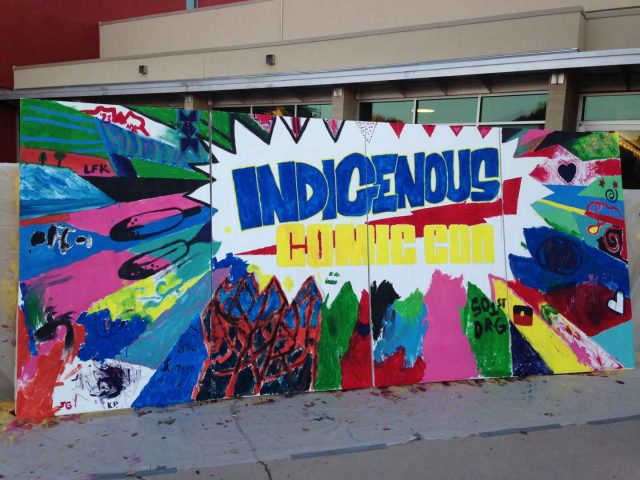 By Darian Jacobs, The Eastern Door

Indiginerds flocked to Albuquerque, New Mexico two Fridays ago, for the first ever Indigenous Comic Con.

Based at the National Hispanic Cultural Center the con was split between two buildings that were filled with people and activities. Live music, screenings, artist alleys, panels, a gaming room and the main merchandise hall, created the space where Indigenous pop culture was on display.

Over 1,000 people attended over the three days, according to the convention website.

Conversations about Aboriginal representation in pop culture were held in panels like “More than a Word” where activist Suzan Harjo discussed her efforts to rid the world of racist sports mascots.

She spoke about her victory against Dartmouth University’s unofficial mascot for their team “The Indians” until 1974, when it was banned. They now have “Keggy the Keg” as their unofficial mascot.

Her co-panelist Mateo Romero noted the presence of Indigenous artists and creations at the con.

“What we’ve been talking about today is essentially a voice,” he said “I’m of the opinion that anyone from an at-risk community just saying they have a voice is a victory in and of itself.”

There were many voices at the convention having serious conversations, joking, singing and sharing their interests.

The experience of walking convention halls and seeing a total Indigenous presence was moving. Comics were on sale and featured stories with characters like Arigon Starr’s Super Indian Comics and more subdued yet serious stories like Betty: The Helen Betty Osborne Story, written by David Alexander Robertson and illustrated by Scott Henderson.

Issues, interests, history and stories were being sold to an audience thirsty for Native pop culture.

From the fanart and cosplay, it was clear that there was a great love for Star Wars at the convention. First place for the cosplay contest was Boba Fett and a Stormtrooper, and there were screenings of Star Wars dubbed over in Navajo.

A film showing the relationship between a nervous young artist and his grandfather in the weeks leading up to a pow wow brought tears to viewer’s eyes at the screening of Waabooz. There were so many things happening over just three days that a time machine would have been useful to see it all.

The event was co-sponsored by Native Realities Press and A Tribe Called Geek.

In an article from the March-April issue of Native Peoples Magazine Dr. Lee Francis (CEO and publisher of Native Realities wPress) said, “It’s a place for us. A place where we can nerd out. A place we don’t usually get to exist within. This event is built as a safe space for Indigenous people and the content we create.”

There is not a date set yet for Indigenous Comic Con 2017 but they are currently looking for sponsors on the website (www.indigenouscomiccon.com).