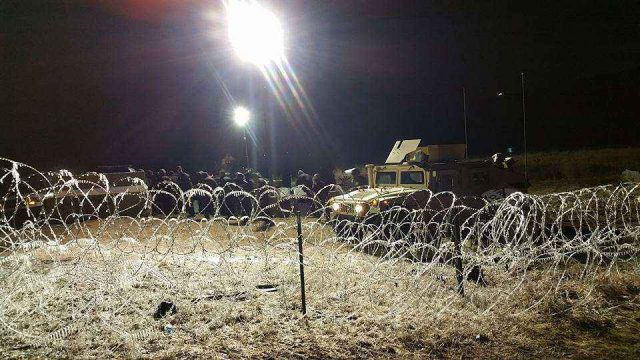 The frozen barbed wire lined with icicles is the result of a water canon shot at water protectors camped in Standing Rock. The $3.7 billion pipeline will cross four states. (Courtesy Konwenni Jacobs)

Water Protectors camped at the Standing Rock Sioux community in North Dakota remain in place in spite of water canons, tear gas canisters and rubber bullets flying in their direction.

“People are stubborn and they stayed out longer than they should have and some got hypothermia, but the medics are right there all the time,” said Konwenni Jacobs, who was one of those sprayed by a water cannon last weekend as the temperatures dropped below zero.

“The doctors were very busy last night,” she said.

As video footage that went viral shows, security forces sprayed water over the barricades attempting to soak those protesting the construction of the Dakota Access Pipeline that is charted through traditional Sioux territory in the region. An estimated 300 people were injured.

Jacobs and others held tarps and shields up to avoid being hit by the water, but often to no avail.

“They would spray at us directly and we just had to keep holding it,” said Jacobs. “You could see people getting hit.”

According to reports from the camp, an activist from New York City named Sophia Wilansky may need to have her arm amputated after it was struck by an apparent concussion grenade.

The Morton County Sheriff’s Department deny responsibility for injuring Wilansky’s arm, as stated by Lt. Tom Iverson of the North Dakota Highway Patrol on the department’s Facebook page, “the injuries sustained are inconsistent with any resources utilized by law enforcement and are not a direct result of any tools or weapons used by law enforcement.”

The department posted a picture of a burned propane canister officers say they witnessed being rolled by a protester on the bridge and then exploding, causing Wilansky’s injury.

The department also claimed that water protectors started dozen of fires near the bridge that was sprayed by the water canons.

Jacobs, and others at the camp, say this is false.

“There were no new vehicles burnt,” said Jacobs. “That was their excuse for having the water there – because we were setting fires. That’s their reasoning, and everybody probably believes that, but there were no fires.”

Pictures posted to social media show welts, bruises and other injuries from the events Sunday and Monday.

“There was tear gas, (and) a guy got hit with a rubber bullet,” said Jacobs, who posted a picture of a friend, who was hit in the stomach by a tear gas canister.

Spirits remain high in the camp, however, with some making toboggan runs on the now icy ground.

“Everybody was looking out for each other, but just to see people getting hit wasn’t nice,” said Jacobs.

Wenhniseriio Sage Isaac went to the camp with six others earlier in November and plans to return soon. He was forced to travel through South Dakota to avoid police, who, he said, have confiscated material people are bringing to the camp.

Isaac said people need to be ready to be uncomfortable to fight back.

“I do believe in the power of prayer and the power of intentions and all those energies, but I was also taught to respect our creators, but not rely on them when we’re given the gift of will and power and all of these things,” he said.

In the end, Isaac hopes an attitude of one mind filters through the camp.

“We’ll all there for what we’re there for, but there’s no one-mindedness,” said Isaac. “I was feeling for weeks and weeks that there needs to be some kind of a grand council.”

Ka’nahsohon Deer and Joe Jacobs drove to the community November 12 to join “on a different level,” according to Deer.

The two men travelled accompanied by three eagles, and were honoured to do a ceremony with chief Arvol Lookinghorse, keeper of the sacred White Buffalo Calf Pipe, and spiritual leader of the Dakota, Nakota and Lakota.

“To do ceremonies with the original pipe carrier is something,” said Jacobs. “For me, you have to have a more spiritual awakening.”

The two were among 38 who took part in the ceremony that was conducted under less than ideal circumstances.

“When we were doing ceremony there was a helicopter and a plane flying over,” said Jacobs.

“They’re there and always making their presence felt,” said Deer.

“It was quite a good spiritual experience,” said Jacobs. “Things that happened when we left Six Nations all the way coming back home. I guess you could say different messages… To be with our brothers and sisters on that mountain doing the ceremony with the family of Lookinghorse, it’s quite something.”

The battle is more than physical for the two men that were inspired by not just the Sioux nations coming together, but all nations, including the Haudenosaunee Confederacy.

“What’s transpiring now is a spiritual battle and we have to rise to the occasion,” said Deer. “We can’t abrogate our responsibilities because the future generations are looking up to us, and we cannot fail them.”