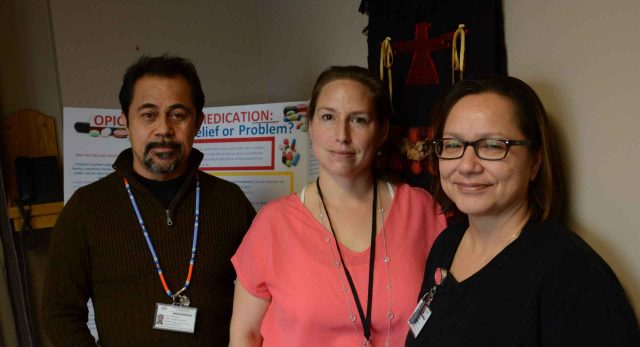 Those who work with opioid addicts such as Jamie Samayoa, Jessica Oesterreich, and Christine Taylor know the very dangerous path an addiction to those types of painkillers can lead someone. (Daniel J. Rowe, The Eastern Door)

“Your brain will only be virgin once,” said clinical supervisor Jaime Samayoa during an interview with The Eastern Door about opioid addiction this week.

Samayoa pointed out that powerful painkillers such as Fentanyl or OxyContin (Oxycodone), alter the brain and central nervous system in dramatic ways that can often lead to addiction.

Opioid addiction was the topic on Tuesday’s Partyline Talkshow on K103 Radio, as concern about its growth has risen recently.

Community services workers have begun an awareness campaign about the dangers associated with opioids and ways to prevent prescription drug addiction.

“People don’t always make the connection between the name of their medication and exactly what it does,” said KSCS prevention worker Jessica Oesterreich. “They just know that it’s a painkiller.”

Doctors prescribe opioids for pain related to a variety of situations, from car or work accidents to sports injuries to chronic pain.

“Heroin, Oxycodone, they’re the same thing. They’re equally as addictive,” said Oesterreich. “It could sneak up on you if people are not well-monitored or are aware of the reasons they’re taking these medications. There are legitimate reasons to take these medications.”

Doctors once prescribed heroin, or diamorphine, to patients before the drug was banned in the 1920s. Health Canada overturned a ban on pharmaceutical-grade heroin, diacetylmorphine, in September for severe addicts.

The name may change, but the need for awareness remains high for prevention workers.

“There’s a high vulnerability for abuse in these classes of drugs in particular,” said KSCS prevention worker Christine Taylor. “They’re pain medications and they’re easily abused, and people don’t realize how easy it (addiction) can happen, and a lot of people do it.”

As part of its awareness campaign, community services staff is promoting safe consumption, storage and disposal.

“People need these medications, so making sure that they’re using it safely and only using it for themselves, and safe storage as well,” said Oesterreich.

Oesterreich visited the Golden Age Club last month and spoke to members for five minutes about safe consumption of any medication the elders may be taking, as well as proper storage.

Since the talk, some elders have contacted KSCS staff about proper storage and issues surrounding their medications.

“It was well-received, and people were very attentive,” said Golden Age president Peggy Mayo. “Most of them were taken by surprise because they weren’t aware of the seriousness of this problem and how it was affecting a lot of people.”

Hanging on to medication is one problem KSCS staff has identified.

If the pill is no longer needed, Samayoa said, time to get rid of them.

“One thing I would recommend for people when they’re ready to stop the medication is have the discussion with your doctor and also dispose of the medication maybe just by taking it back to the pharmacist,” he said.

“They will know what to do, as opposed to just throwing them in the toilet or in the water stream.”

All three KSCS workers mentioned communication with doctors being key for patients who are prescribed opioids.

“We’ve been putting a lot of information out about how to speak with your doctor about using the medication the way it’s supposed to, so not taking more than you need,” said Oesterreich.

“And every time you see your doctor, talking to them about the dose that you’re getting and about how much longer you’re going to need those medications – and if you really think it’s necessary for you to keep taking them.”

The goal in recovering should always be wellness, according to Taylor, and more people need to focus on being informed about illness or pain and the multiple paths to recovery.

“It’s not just here,” said Taylor. “A lot of people want that quick fix and they think that by taking a pill that it’s all going to go away. There are other ways to wellness especially in terms of medication… It’s got to be a combination of everything.”