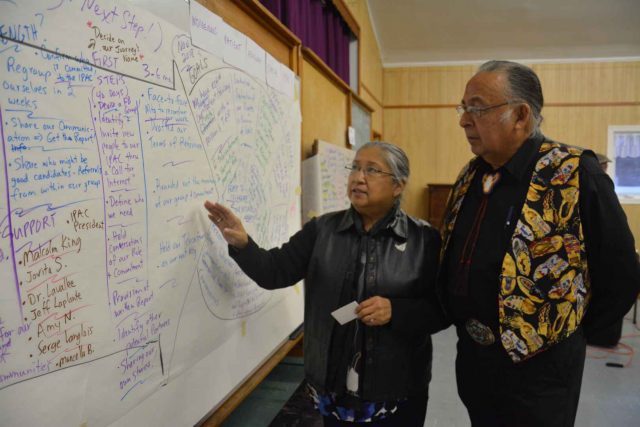 Barbara and Clarence Nepinak are part of the new nation-wide research project to fight diabetes. (Jessica Deer, The Eastern Door)

Tamara Beardy’s daughter is living with Type I diabetes in the Tataskweyak Cree Nation in northern Manitoba.

She was in Kahnawake Tuesday for the first strategy session of the nationwide Diabetes Access Canada network that’s aim to fight diabetes with the patients’ perspective at the lead, rather than the researchers.

“It’s very relevant and important because patient-oriented is very important to me,” said Beardy. “I’m a parent of a child who lives with diabetes, so having them advise you like this allows me to come and add my voice on a different level.”

Dr. Gary Lewis is the principal investigator of a national grant to prevent and study diabetes complication.

“We have a big focus on Indigenous peoples where diabetes is one of the major health issues,” said Lewis.

The network includes others like Beardy, who suffer from diabetes or are family members of those with the disease.

The patients will be the ones adding insight for researchers to follow.

Ojibway Barbara Nepinak from Winnipeg talked about the plan of action the participants came up with Tuesday at the United Church Hall.

“We have researchers, we have community members, we have front-line workers, and we’re all participating in the process where we have to come together and work together collaboratively and to be able to create a better community of wellness for the future of our people,” said Nepinak, whose husband Clarence suffers from diabetes.

At its first meeting, the group identified the network, what its strengths are, what the goals should be and how to get there.

“Today (Tuesday) was very productive because not only did we have community people present, but we had professionals and academics and leadership here,” said Barbara.

The network that included 15 participants will also focus on kidney disease, pain and mental wellness.

Tuesday was the first of many such meetings.

“We have very big plans to try and make some positive impacts in Indigenous peoples diabetes across Canada,” said Lewis, who researches diabetes out of the University of Toronto.

Lewis and the Diabetes Access Canada members are excited about flipping the process in research, and letting those living with the disease be the guides.

“It’s not all about me as a researcher. It’s about the person living with the disease,” said Lewis.

“It changes the whole perspective. I may think that some kind of research is really interesting and I want to do it, but when I come and bring it to the table here, they may say, ‘that’s not really of importance to us.’ They assist and help me direct the research, so it becomes more relevant for the person living with diabetes.”

The change in focus is something those who suffer from the illness welcome. The old model often involved researchers and doctors giving patients treatment and lifestyle plans that were not always relevant to their unique situations.

“They don’t look at the all-around affects of diabetes,” said Beardy. “Sometimes it’s just based on numbers… There’s so many things that relate to diabetes on the whole, and you can’t just say this is how it is or this is the way it’s supposed to be. You’re not there 24 hours.”

Kahnawa’kehró:non Alex McComber is a member of the team and invited the network to the community for the first face-to-face meeting.

“They do a lot of research here, and are leaders in Indigenous health research, this group here and Alex in particular,” said Lewis.