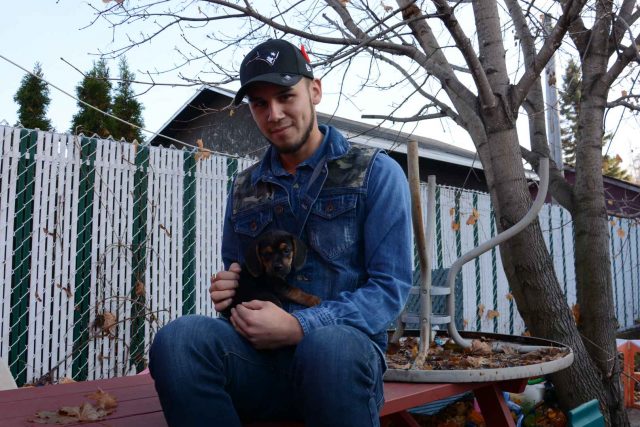 Thasonterha Lahache kicked a drug and toxic relationship habit over the past year, and looks to focus on music, sports and staying clean alongside Buster, his puggle companion. (Daniel J. Rowe The Eastern Door)

It was the first time the 24-year-old played sober.

“She passed away 10 years ago,” said Lahache. “It’s called “Grandma Scooby” because she used to call me Scooby Doo because whenever she’d watch me and turn around for a split second, I’d be down the hallway like how Scooby Doo takes off.”

Splicer always told her grandson that she wanted to play country music with him, and Lahache wanted to honour her after a nine-month journey to sober recovery.

“I never got the chance to do that with her,” he said.

The self-taught musician checked into the Portage treatment centre in January after half a decade of drug and alcohol abuse left him spiraling downward with little hope of getting out of the cycle.

“Everything was just hitting the fan,” he said. “I finally got out of a relationship, but realized that I still wasn’t happy because it’s all a big cycle.”

Lahache first opened up about his drug use to his hockey teammate Chris Diabo, and admitted he had a problem in the fall of 2015.

“The people I hung out with basically all used also, and they were the only people I called friends, so I couldn’t talk to them about it. So I asked my buddy Chris,” said Lahache. “I called him and said, ‘I need to talk to you. I need to tell you stuff.’ He called me over, and I told him everything.”

Lahache was quickly invited into Diabo’s family where he found stability and support.

The next step was opening up to his sister, Tara Cross, who called Kahnawake Shakotiia’takehnhas Community Services, and eventually directed him to the Portage program that focuses on developing self-esteem and social skills, along with social reintegration, positive lifestyle and a better handling of life’s challenges, according to the website.

For his parents, Colleen Giasson and Wayne Lahache, seeing the trouble their son was in was not easy.

“I was sad, distraught as a mother, and had no idea,” said Giasson. “All I could think was why? Gee. I’ve been through a lot in life and never resorted to any drugs or heavy alcohol. With him never missing anything in life and having much love and affection, I just couldn’t understand why.”

Lahache spoke about his journey from casual drinking with friends to a daily cocaine habit he developed.

“I started drinking when I was 18, and eventually started smoking pot, and it just became bigger and bigger,” said Lahache. “In the end, it’s all addictions, it’s just a big cycle.”

He admitted that he would escape reality through drugs, but also toxic relationships to cover feelings.

“I never was really happy for a long time in my life,” he said. “I’ve always went through relationships and a lot of breakups, so I was always carrying that on my shoulders, and things started to pile on.”

The Portage program, Lahache said, is something everybody could benefit from. The strict rules that include making your bed every morning, showing up for meals on time, washing and mopping the floors and other requirements, hammer a sense of order for the participants.

He spent two months in Montreal’s daycare centre Tuesday to Thursday from 10 a.m. to 4 p.m. before heading to the live-in facility near Lake Echo in Prevost, Quebec.

Lahache learned much about his addictions over the past year, and the strength needed to kick habits.

“The reason why we use as human beings is because of the feelings we live and we don’t know how to manage them, and it’s behind behaviors,” he said. “I thought that going there, me being in this safe environment was going to stop me from using drugs. It’s not going to. You need to have the will power to actually want to change things in your life.”

Lahache said he saw around 200 people enter the Portage program, take a look around, and bail due to the demands of the journey to get clean.

On September 25, Lahache walked away and today marks his 10-month anniversary of being clean.

“It’s not a walk in the park,” he said. “You have to keep busy. If you sit around and don’t do anything, you can easily fall back into your habits. If you’re bored constantly, it’s a vicious cycle.”

He said getting out of Portage was exciting, but also sad knowing he was leaving those he had grown close to behind.

Throughout the program, participants are only allowed out for 48-hour periods, and graduating meant completely being set out into the world.

“It was kind of like a high and then back down to reality,” said Lahache. “Basically one of the reasons I used was because I was so lost in life. I didn’t know where to look and what to do with myself.”

He started working, going to meetings and picked up a puggle (pug/beagle cross) named Buster.

His support group includes his Chiefs ball hockey team, residents from his program, his parents and sister.

For now, Buster will get his attention, and maybe years down the road Lahache will be ready to give back to another person.

Lahache also realized that he had to walk away from friendships he had before entering the program, but not because of ill feelings or disdain for those he used to spend his time with.

“It’s not because I don’t think they’re cool or anything like that,” he said. “I don’t think I’m better than anybody else, but if I’m going to live a sober life, I can’t surround myself with people who drink or people who do drugs… I wish everybody the best, and it’s nice to see people do better.”

Lahache goes to weekly meetings Monday, and has a counselor that he visits. He spoke with The Eastern Door with candor and honesty, and had no issue answering any questions that were asked of him.

“I’m not ashamed of admitting that I’m an addict,” he said. “At the beginning I was, but I shouldn’t be ashamed. I should have been more ashamed of walking into a bar, sitting down and buying off somebody. Why should I be ashamed of going to get help for an addiction?”

Lahache sees those who look down at someone struggling with addictions as similar to a bully, who targets someone they don’t understand.

One place he will find help is at home. Seeing her son struggle was painful for Colleen, but seeing him choose to recover was empowering.

“I was so proud and happy that he made a choice on his own to seek the help he did on his own,” she said. “That takes strength to realize you need help and to ask for it.”

Giasson added that she and her husband have been sober for the past months as well, inspired by their son’s example.

“The whole family has learnt from Thasonterha,” she said. “We are living a more healthy and clean life.”

Thasonterha continues to work on his music, and may return to school in the near future without the baggage of pain and addiction weighing him down.

“All these pains that you hold onto and you keep throwing rocks into your knapsack until you’re weighed down,” he said. “Eventually you can grab into any addiction. In the end, you’re just escaping a feeling. Those feelings lead to action.”