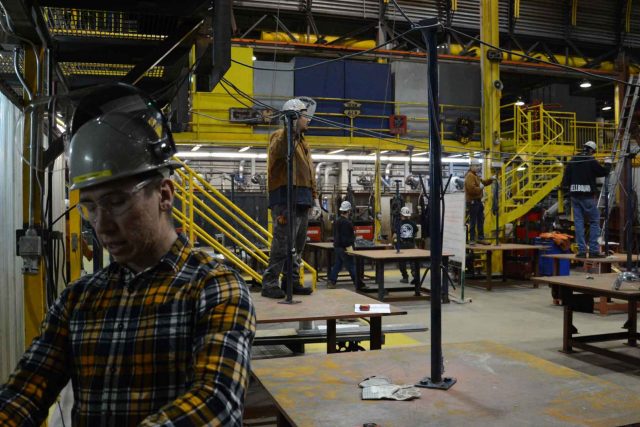 Hogan Gilbert and the two-dozen young men that have begun a 1200-hour training program in ironworking will continue a tradition in the trade that has been part of the community for generations. (Daniel J. Rowe The Eastern Door)

Aaron Rice past his 30th birthday, and wanted a change in his life’s trajectory.

“I took some time to think about what I wanted to do with my future, and instead of jumping from job to job, I wanted a career,” he said. “Now, I’m 31, and I’ve got to shit or get off the pot type of deal.”

Rice is among the two-dozen young Kanien’kéha men at the Centre de Formation des Metiers de l’Acier in Anjou just past Highway 40 in the midst of putting in 120 hours of ironworking training.

Rice, like almost everyone from Kahnawake in the program, has multiple relatives, who are or were ironworkers, and is motivated to join the ranks of Kahnawake’s legendary skywalkers.

Aaron worked as a cashier before entering the program that started October 31, and admitted to some nerves about being able to do the tough job.

“I was a little concerned not thinking I’d be able to handle the load, but push comes to shove I can handle it,” said Aaron.

Sylvain Forbes has been teaching the course for 18 years, and is very familiar with the history of Mohawk ironworkers.

He watches first-hand as the young men jump at the opportunity to learn the trade.

“So far, the atmosphere and the attitude is very positive,” he said. “They seem to be quite determined. It’s pleasant to work with them.”

Students have thus far learned to cut with an acetylene torch and weld. They have also attained their ASP Construction safety cards.

When The Eastern Door stopped by Wednesday night, students were working on setting up equipment for fabricating pieces, and learning how to properly use a cutting disk on a grinder and a magnet drill.

“Definitely,” said Hogan Gilbert when asked if he enjoys the work. “I’ve always been better learning with my hands, so I catch on pretty quick.”

Cam Horn, like Aaron Rice, is following a history of ironworkers in his family, and left Onondaga Community College to enter the program. The swap from having his face in a notebook to having sparks flying from an acetylene torch was a welcome change.

“I prefer this, working with my hands,” he said. “It’s better than looking at a book in class.”

Horn’s father Mohawk Council of Kahnawake chief Carl Horn worked to get students from the community in the program as part of the Kahnawake Workforce Inclusion Plan that the MCK initiated with the goal of getting workers on the Champlain Bridge construction and renovation project.

“The goal from day one was to employ as many of our people as possible on the new bridge project including our younger generation of ironworkers,” said the elder Horn. “There was a lot of interest for this program, but we were only able to accept 24 students.”

Tokwirih’shon Goodleaf plans to hit New York when he’s completed the program and work alongside his father Bart Goodleaf in the Local 40 union. The opportunity to work where fathers, grandfathers and great-grandfathers of almost every Kahnawa’kehró:non have worked is exciting for Tokwirih’shon.

“I feel real good getting to learn everything my father’s learned before me,” he said. “I’m really excited to have a chance to work with my dad too. There’s a lot of guys from town there, and there’s a lot of people you know. It makes it easier.”