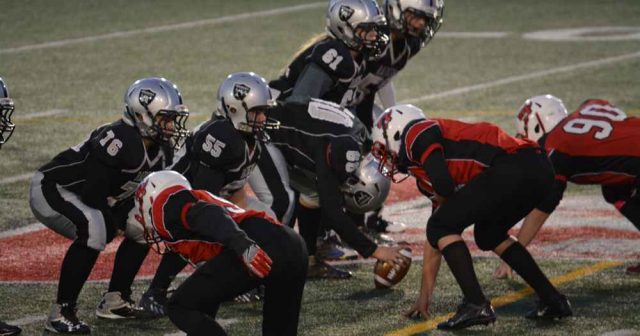 The Peewee AAA Chateauguay Raiders took on the LaPrairie Diablos Saturday afternoon at Molson Stadium, the home of the Montreal Alouettes. (Jessica Deer, The Eastern Door)

The season for the Peewee AAA Chateauguay Raiders ends not with a win, but a whimper.

The team lost 62-21 against the LaPrairie Diablos on Saturday afternoon for the provincial championship title.

“They did the best they could but, fair and square, the other team just beat us. A lot of things just didn’t go our way. We tried plays, there were fumbles that kids usually don’t make and just getting behind like that – they got overwhelmed because they’re not used to it,” said Raiders coach Mike Phillips Sr.

The Raiders were off to a rough start for Saturday’s game, which took place at the Molson Stadium in Montreal.

The Diablos’ Justin Duquette returned the initial punt for 45 yards and Louis-Félix Leblanc immediately followed with a 55-yard run for a touchdown.

“As soon as they got the ball, the first play, they scored on us. That’s never happened. We’ve done it a half dozen times this season with other teams. They would just kick the ball to us and we’d run it right back, touchdown,” said Phillips.

After the first half, the Raiders were down by 13.

“We were losing, but that’s not a big deal. It’s doable to come back from that if you pull yourself together. But it just didn’t happen. The other team was just too strong that day,” said Phillips.

Several of the players, including Phillips Jr., will be moving up to the Bantam team next year.

“He’s talented. I’m not saying that because he’s my son. He understands the game; he sees plays happening and is quick to react to it. It’s good on that level. He’s not the only one, there are quite a few kids that are good,” said Phillips.

Phillips Jr. executed 11 tackles during the game, while his teammate Quintin Sargeant had six. The game also finished with three touchdowns by running back Steve Bradley Noupeupong.

“We played well but not the best, I think we faced too many easy teams so we thought they wouldn’t out up a fight,” said Okimawinew. “We played good but not good enough.”

Despite the loss, the Raiders had an impressive season. They were undefeated, taking home the championship trophy for the Montreal Regional Football League a week prior.

“We never had to worry before. We knew we had a couple of hard teams in our league, and things went our way,” said Phillips.