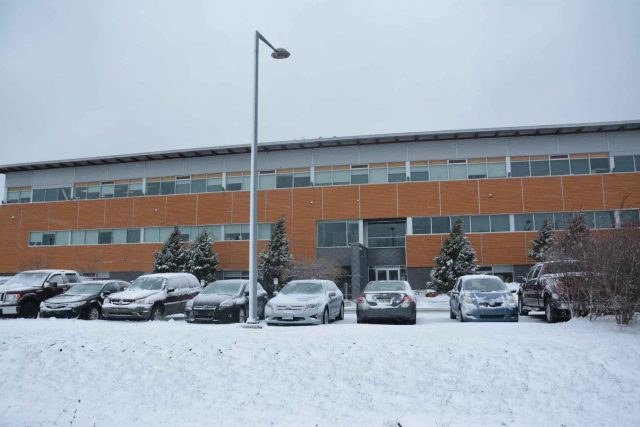 Centre Solutions, located at the Kahnawake Office Complex, has concerns about online gaming policies at the Mohawk Council. (Jessica Deer, The Eastern Door)

“Because New Jersey has legalized online gaming and the DGE is a regulatory enforcement authority, it was able to reach an agreement with the Kahnawake Gaming Commission (KGC),” reads the article.

“The way it’s framed really goes beyond what we have between the DGE and Kahnawake,” said Norton. “It’s more like a cooperative relationship that’s been developed and we make our best efforts to make sure that any of our customers, clients existing and those that are coming in do not have any activities taking place in the US.”

Morris sees a concerning series of events including the sale of Continent 8, and council’s regulatory enhancement in September leading to the announcement this week.

“You have a number of pieces that are being put into place,” he said. “You have the C8 issue, you have a policy shift, and now you have an announcement of cooperation for companies. Will that impact me as a business person in the community?”

The article states that the DGE has reached a series of agreements with the KGC to block access to US residents from servers in Kahnawake for unlicensed online sports wagering and online gaming.

Norton said the relationship is simply one of information-sharing and co-operative oversight.

“There’s no partnership. There’s no written documentation,” said Norton. “It’s just and understanding that we’ve come to – a handshake – that we’re going to work together. We’ll advise them, they’ll advise us if they find that we have somebody that’s been licensed here, and they have information about it that they’re possibly doing business in the US, they’ll advise us. They’ll say, ‘you better check these guys out.’ Similarly too, we’ll advise them if we know of anything that’s happening on their side.”

His company has not been directly involved in online gaming since the summer.

“I was forced to completely restructure this place in terms of what we were and we are going to be in terms of long-term,” said Morris. “Basically the servers have gone. I now longer have a license for that.”

Centre Solutions finished switching its focus August 19, and now provides call centre, human resource, and marketing services to its clients, but no gaming.

Morris insists that he has remained within the law throughout his entire business operation.

Morris said none of his clients are in New Jersey or Quebec.

The Kahnawake Gaming Law highlights “Gaming Related Activities,” activity the commission (KGC) considers reasonably related to gaming or “to the operation of gaming, including any business that offers goods or services to persons who participate in gaming within the territories.”

“One of the things that has changed tremendously is the business model that has been working or was working in Kahnawake in relation to the online gaming industry,” he said.

The Mohawk Council announced in September that those applying for or holding permits with the KGC that accepts players from a US state without that state’s permission will be denied their permit.

Deer explained that it is about following the law for users and licensees.

“In whatever jurisdiction they’re are operating in, they have to comply with the laws of that jurisdiction also,” she said. “We can’t give a license to just do whatever anybody wants to do.”

The law does not specifically apply to the US, and could apply to Europe, Asia or other states, Deer said.

“No matter what jurisdiction a licensee is practicing in, they have to respect the laws within the jurisdiction they’re gaming in,” said Deer.

The change in policy, for Morris, should have accompanied more consultation with businesses such as his that would be potentially affected by it.

“From my perspective, changing public policy that moves 180 degrees from an old business model to a brand new business model requires, certainly, consultation,” said Morris. “Because you’re directly impacting a business run by a Mohawk, employing Mohawk people etcetera. You need to go through a process.”

Morris’s company employs 340 employees including 45 from the community. He said he’s done all that has been asked of him.

“We’ve adapted and abided by everything that was asked of me over the last year, so I’m feeling a little concerned,” said Morris.

Gaming, Morris said, happens at the servers. His company does not have any servers or provide gaming, but is attached the industry through the call centres, marketing and other services.

Deer said the “gaming related activities” definition within the 1996 law could be amended in the future.

“That’s always something that could be expanded upon,” she said.

The big question, for Morris, is where the policies and positions are leading.