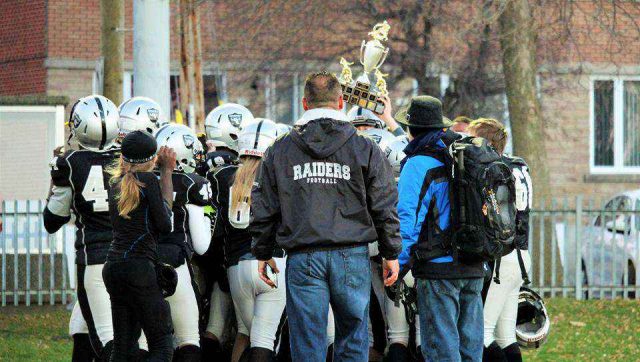 The Chateauguay Raiders AAA Peewee football team proved one thing: bring your best if you want to beat them, and then add some more.

The Raiders won the Silver Cup 33-14 against the Western Patriotes on Sunday afternoon at the Joseph Laberge field in Chateauguay.

“Our running was really good, we had Steve (Bradley) who scored three touchdowns. Our defence played good and consistent. We only let 14 points against them, which was really good,” said running back Michael Phillips Jr.

“It was a really close game, Western wanted it bad but our team is incredible,” said Okimawinew. “Steve and Michael worked really hard Sunday and I can’t forget our QB. He was working hard too. It was a long and hard game but I find both teams played well.”

Western has been one of the few teams able to put points on the board against the Raiders this season.

Don’t let the “Silver Cup” name fool you. It’s the regional championship earning them a date at the provincial championship this afternoon against the Laprairie Diablos.

The game starts at 4 p.m. at the Molson Stadium, the home of the Montreal Alouettes.

“We’re just going over our plays, make sure our kids know what they have to do – know what their responsibilities are,” said Phillips Sr. “The thing with this team, we have no clue anything about them because we’ve never played them. We have no idea if they’re tough, what their strengths and weaknesses, but we always just play our own game.”

Many of the players on the team have been playing together for several years. Two years, as a Mosquito team, they took home both the Silver Cup and provincial championships.

“It’s a big deal for the kids,” said Phillips Sr. “To be able to do that again this year with a lot of the same kids would really be something special.”

The players are equally excited.

“To be the number one team in Quebec would be pretty exciting,” said Phillips Jr. “We’re going to play as a team, play 100 percent and hopefully come out with a victory.”