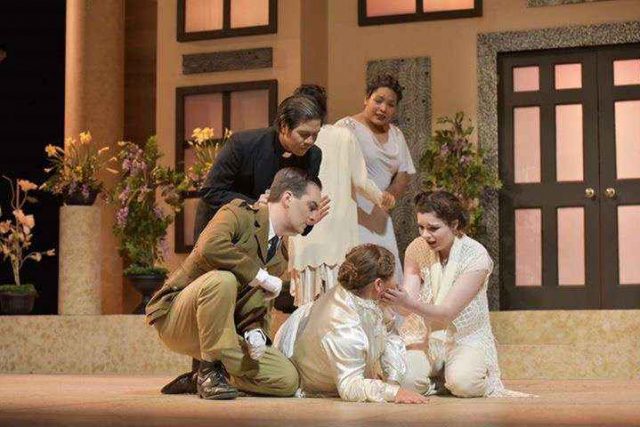 The spotlight shines on Wahsonti:io Kirby in Montreal, as she takes on a starring role in Dawson College’s production of Much Ado About Nothing.

Directed by Winston Sutton, the Shakespeare comedy opened on Wednesday night and will run until November 26.

“I’m just looking forward to telling the story and having fun with my character. I love my character and I’m just excited to go out there and have fun and be with my best friends on stage,” said Kirby.

Kirby plays Hero, the beautiful young daughter of Leonato and the cousin of Beatrice who falls in love with Claudio – a young soldier.

“She’s kind of the young ingénue of the group. She’s trying to get married to a soldier who has been elevated in status. There’s a mix-up and her wedding doesn’t go as she planned,” said Kirby.

Do they ever? This is Shakespeare after all.

Kirby is no stranger to the stage. She was a staple of The Turtle Island Theatre Company, taking on many lead roles in their productions. However, Much Ado About Nothing is the first time she’s performing Shakespeare.

“I love Shakespeare. Shakespeare is very similar to a song, in a way. Since I’ve done musicals for almost my entire life coming to Shakespeare was a challenge but also not at the same time in the way that I thought rhythmically and the way that I understood it,” said Kirby. “I just love the musicality of it and how every nerve is on the outside with this. You’re expressing how you feel instead of trying to contain or hide it with other contemporary texts.”

Kirby is in her third and final year in Dawson’s professional theatre program.

She’s also the only Kahnawa’kehró:non in the program.

“Auditions for the program are in March. It would be really great to see another Onkwehón:we face here,” said Kirby.

“We’ve all been together for three years consecutively and we’re together with each other from nine in the morning until sometimes 11:30 p.m., so we really have a very strong bond with each other. It’s more like a family than anything else,” said Kirby. “That can be hard when it comes time to casting when people want different roles, but you have to look at the group and see where you fit. That’s a good idea, especially when going out in the real world and seeing where I feel in terms of the casting scheme with the demographic that I’m used to and the demographic that I’m going into.”

Much Ado About Nothing is the group’s first of three major productions that will take place throughout the school year.

After her final year, Kirby said she’s thinking about applying to university, applying for programs in musical theatre.

“I do love theatre, but musical theatre is a little bit of a stronger passion for me. But, if that doesn’t work out, I’m on the fence about just starting my career right away and going out for auditions in Montreal, seeing where that takes me,” said Kirby.

Much Ado About Nothing performances run until November 26, with an 8 p.m. show time. Kirby is featured in another performance tonight, as well as Thursday’s matinee and Saturday night. Tickets are available at the Dawson Theatre Box Office at 514-931-5000.