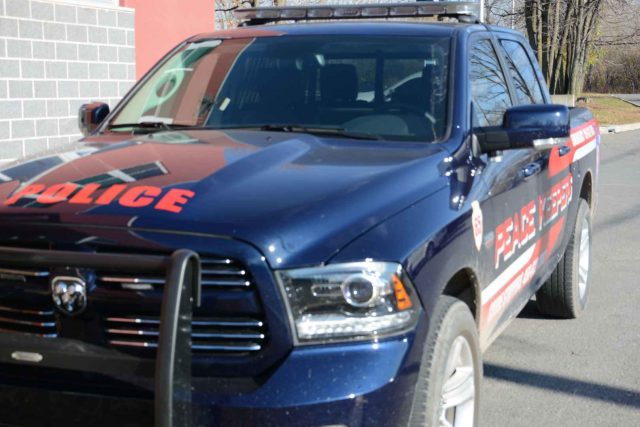 Phones of reporters and Peacekeepers in Kahnawake started buzzing last week when word got out that one or more PKs had been caught in a random drug test and that one had been fired.

PK chief Dwayne Zacharie confirmed Friday that an officer had been terminated, and a news release later in the week said two were suspended, and an on-call dispatcher’s relationship with the PKs was terminated.

“I can’t comment on human resources issues, it’s confidential,” Zacharie told The Eastern Door when asked for a comment. “I’m not able to make a comment on that.”

The news release said that Medisys, a company HR departments hire to do tests and provide recommendations, conducted tests at the station October 11. Medisys is a private company contracted by companies or organizations that need tests done.

A representative from the company said they are sometimes asked to perform tests before employees are hired or during their employment.

PK and staff showed up for a mandatory meeting on the day, and were immediately told they were to empty their pockets, and follow a nurse to bathroom to provide a sample.

According to a person who took the test, the nurse stationed herself outside the toilet door and immediately took the sample, and checked the toilet to ensure no sample swaps were made.

Zacharie said no charges are forthcoming in relation to the four individuals who tested positive.

“It’s a human resources issue. It’s not a criminal code offence that we’re dealing with,” he said.

PK policy dictates that officers be free of the influence of drugs and/or alcohol, and the police are not the only in the community who undergo testing.

Bus drivers and Mohawk Council of Kahnawake chiefs are also required to be free of drugs, and are tested.

Council chief Gina Deer, who was formerly a PK, said she supported Zacharie’s handling of the situation, and was shocked to hear of the three officers who failed their tests.

“Personally I’m really saddened by it,” said Deer. “We have to deal with it, and it’s Dwayne’s responsibility, and he dealt with it, so I’m very happy that it’s being done, it’s being addressed, and more and more of this testing needs to be done when people work for MCK or the public directly.”

Council chief Carl Horn had similar sentiments, but added that mistakes made are amplified for police and other public occupations.

“I will never pass judgment on any Peacekeeper,” said Horn. “I have too much respect for the men and women that wear the uniform and protect our community. It’s a very stressful job and mistakes are made. Those get magnified.”

A PK, who wished to remain anonymous, hopes that the community will be encouraged that the PKs are held accountable, and understand that those who tested positive for drugs may need help, not ridicule.

“People should be happy knowing that your police officers are clean, and the ones that need help, hopefully they’ll get the help that they’ll need,” the person said.

“It’s not like it was swept under the rug. They are paying the consequences for it, so if it happens again and they fail again then the ones that got suspended are going to get fired.”