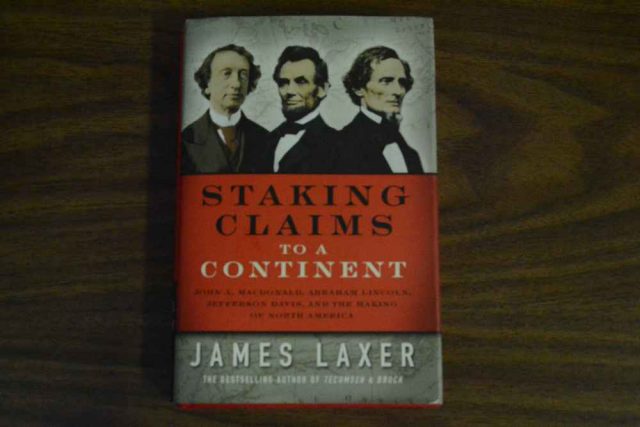 The United States of America was split into two dug-in and opposing factions, one that favoured a white supremacy over a subject group that resulted in war. Industrial projects would cut through Onkwehón:we territory indiscriminately, and the whole settler project was about to be upended, and a new era to begin.

No. I’m not talking about Tuesday’s election.

I’m talking about the middle and late 1800s, and three leaders that would alter the makeup of the continent forever.

The American Civil War is a monumental era in the history of Turtle Island and one that affected the 19th and 20th centuries in a major way and had grave consequences for many people during, but also after.

James Laxer’s recently published book Staking Claims to a Continent; John A. MacDonald, Abraham Lincoln, Jefferson Davis, and the Making of North America (Anansi Press, $32.95) takes an interesting look at the three leaders, and the war that split the United States in two, and had a major role in British North America (Canada) in its infancy.

It’s a great book with some eerie similarities to the America of today, particularly after Tuesday’s election results.

The American Civil War is a fascinating subject for any student of history, and it changed the course of immigrant (settler) populations on Turtle Island forever.

The conclusion of the war made one thing clear: Americans weren’t going anywhere and they would kill hundreds of thousands of their own to solidify the union and prove that point.

Though Laxer’s book does not deal specifically with the repercussions for Onkwehón:we communities with the exception of the final chapter, the impending doom is clear.

The second volume of this book could indeed be Clearing the Plains by James Daschuk, as hundreds of thousands of nations across the two countries would be the next victim of manifest destiny and industrial expansion.

In Laxer’s book we are reminded that there were three nations that emerged in the 1860s on the continent, two of which survived. The Confederate States of America was destroyed in the war.

All three – British North America, the United States of America and the Confederate States of America – are given equal exploration and Laxer succeeds in showing how these states became what they were and are.

“All three nation state projects had their strengths and severe weaknesses,” he writes. “Each could have succeeded or failed… The success or failure of the projects would have consequences not only for the long-term future of the continent, but for the global order to the present day.”

Yes, the USA did not emerge out of the ground from seeds planted by George Washington and zapped by Benjamin Franklin’s lightning rod. Canada did not emerge from the wake of Samuel Champlain’s boat and grow organically.

The former was forged in war, and the latter in politics, and Laxer shows just how close both came to being much different, as well as the precarious stability of all three nation states.

The final chapter chronicles the Red River Rebellion led by Louis Riel and his Metis Nation, and the beginning of Canadian prime minister John A. MacDonald’s expansion west to the Pacific.

Laxer is wise to include a final chapter on Riel’s rebellion, and ultimate execution, as this act was the first of many, bloody, aggressive and determined efforts to grab land and settle the west of both countries.

An excellent pair of companion pieces for this book are Ken Burns’ documentary series The Civil War and The West. In watching the two series, one gets a better understanding of American identity and how it was forged. The West is particularly depressing, as one by one the nations of the plains and west coast are destroyed by the mechanics of war and industry.

In reading Laxer’s book, it was hard to miss the parallels between the railway projects at the time and the current industrial projects, most notably pipelines.

Rail lines, much like pipelines, rarely bypassed a nation’s territory. Today, nation-wide protests pop up to support the outnumbered and outgunned communities the projects target, but in 1860, it was much different.

In addition, it is interesting to read about Lincoln’s mission to save the union, while Davis sought to pull it apart.

The book is a feat in that it includes an interesting and engaging look at three “great men of history” in Lincoln, Davis and MacDonald, while hinting at the lasting impact of their personalities and policies.

Even more, the book clocks in at just over 300 pages, making it an enjoyable and digestible read.