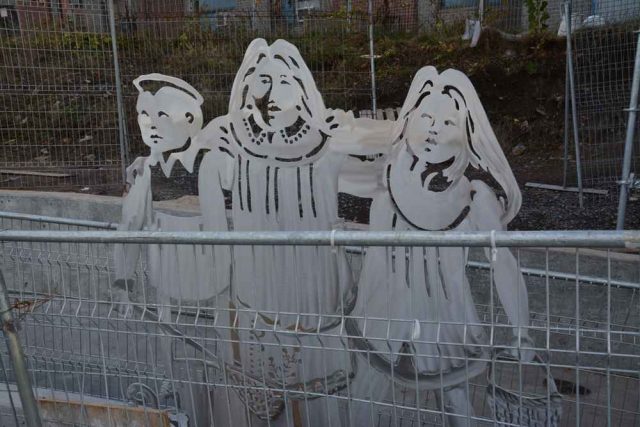 Aluminum sculptures made by Owisokon Pauline Lahache can be seen at the entrance of the hospital’s new in-patient wing. (Jessica Deer, The Eastern Door)

With the first phase of the Kateri Memorial Hospital Center’s (KMHC) expansion and renovation project now complete, visitors will notice a number of impressive paintings and sculptures incorporated into the brand new in-patient wing.

“The art integration within the KMHC’s Expansion and Renovation Project follows an art integration policy adopted by Quebec in 1961, wherein all public buildings devote one percent of their construction budget to the incorporation of art,” said Onawa Jacobs, the art integration specialist for the project and the president of the Art Integration Committee.

“What makes our art integration project different from the rest is that we opened the competition to any interested Onkwehón:we artist.”

The last call for artists went out in October 2015, with four works of arts selected in February by three different artists.

Outside the entranceway stands two aluminum sculptures created by Owisokon Lahache. She spent six weeks working in a studio in Boucherville during the summer, creating the nine-foot tall sculptures, which are titled “Kahwatsí:re – Keeping the Fire Alive.”

“Being able to produce a large piece of artwork for our community that’s going to outlive me for sure – it’s just great,” Lahache told The Eastern Door.

“I decided to do it in aluminum because the colour of it reminds me of the silver covenant chain, that we still have our own way and that other people need to learn about us as well.”

Once inside, visitors will see a three-panel painting spanning the entire wall by husband and wife duo Donald ‘Babe’ and Carla Hemlock.

“We do hope that the patients, caregivers and families will find a sense of peace and comfort as they view the installation,” Carla said. “We would also like to thank the Kateri Hospital Centre for giving us the opportunity to create this for the community.”

The KMHC Art Integration Committee was established in 2013 with representation from staff members, the Quebec Ministry of Culture and Communications, and the project’s architecture firm, to oversee the selection process.

“The proposals we received from the individuals selected really showcased the vision and spirit of the KMHC and its staff. Their artworks exude the warmth, care and Kanien’kehá:ka traditions and principles the KMHC values,” said Jacobs.

The artists went through a lengthy process for their work to be selected, including constructing a maquette and presentation to the committee.

For Lahache, the process was nerve-wracking, but exciting.

“I had to give examples of what I was doing, I had to make a maquette, I had to write up how much it was going to cost, the materials – like a bid for it. Then, I had to wait. It was quite a while after when they called to let me know that I had got the sculptures,” said Lahache.

“I’d like to thank the Kateri Memorial Hospital for honouring our community’s artists and picking artwork – not just mine, but all of the artists artwork that reflects our culture.”

Upon completion of all phases of renovation and expansion project, the hospital will also incorporate a glass sculpture by Lahache at the outpatient entrance, as well as paintings by Akwesasne’s Natasha Smoke-Santiago.

A formal unveiling and celebration of all artwork will take place after construction, which is scheduled to be completed in March 2018.

“It’s been a lengthy process for sure but a worthy one. Because of this project, we will be able to exhibit the beautiful creations of three wonderful Kanien’kehá:ka artists for many years to come and for the enjoyment of all who use the hospital,” said Jacobs.